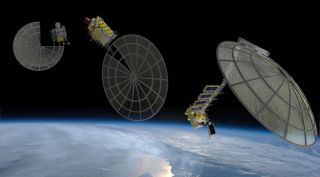 Artists' concepts of Made In Space Archinaut spacecraft 3D-printing satellite reflectors in space.
(Image: © Made In Space)

WASHINGTON – Made In Space's new satellite-construction robot could herald a new generation of autonomous machines working on the moon — and perhaps even Mars.

At the International Astronautical Congress (IAC) here on Oct. 25, representatives from NASA and the California-based company Made In Space talked about the forthcoming opportunities for in-space manufacturing, which they say will reduce the costs and complications of shipping stuff around the solar system.

One of the big advantages of in-space manufacturing is that it allows the construction of components that are too big to fit atop a rocket, as well as fragile structures that cannot survive the rigors of launch, said Justin Kugler, Made In Space's vice president of advanced programs and concepts. He said designers can thus optimize for "the design and service life of a satellite, as opposed to surviving those first 15 minutes to get out of [Earth's] gravity well and the atmosphere."

One of the first major tests of this technology will be Archinaut One, a spacecraft Made In Space is developing with the help of $73.7 million in NASA funding. Archinaut One, which is expected to launch as soon as 2022, will 3D-print two 32-foot-long (10 meters) beams in Earth orbit, one on either side of the spacecraft. These beams will then unfurl solar arrays that can generate five times more power than traditional panels used by similar-size spacecraft, NASA officials said in July.

During the IAC presentation, Kugler said that Archinaut One will do more with less, because the craft will overcome traditional small-satellite power constraints. Made In Space will even use the opportunity to test a broadband-radio frequency instrument from Northrop Grumman, he added.

From the space station to the moon

In-space manufacturing is already happening on the International Space Station, said Raymond Clinton, the associate director of the science and technology office at NASA's Marshall Space Flight Center in Alabama.

Facilities aboard the orbiting lab today include two 3D printers built by Made In Space, as well as plastics printers. This work takes place on the U.S. National Laboratory and is facilitated in part by NanoRacks, a company that assists other entities in getting experiments or equipment to space.

As NASA pushes to return humans to the moon in 2024, the agency anticipates growing the capability to do manufacturing on the lunar surface. NASA's lunar surface innovation initiative calls for a series of demonstration missions through the 2020s that will eventually help the agency and its partners prepare for a human mission to Mars. NASA Administrator Jim Bridenstine has said that the agency aims to launch this next giant leap to the Red Planet in 2033 or 2035.

"This is how we see in-space manufacturing moving forward," Clinton said. "And as the agency has said, we are going to the surface of the moon to demonstrate the technologies we will need when we go to Mars. That is the next step."

NASA is already planning for lunar manufacturing through the Commercial Lunar Payload Services (CLPS) program, which has selected nine companies for possible future missions; more may be on the way after a selection process that closed a few weeks ago.

At first, the tech will be tested on Earth. NASA is engaging in a drill "down selection" for future CLPS missions, Clinton said, as well as producing high-fidelity lunar regolith (soil) simulant to help missions prepare for the dust on the lunar surface. Missions that will help enable astronauts to "live off of the land" on the moon by exploiting lunar resources should come in the mid-2020s, including extractions of consumables (such as water) from the regolith.

"It's increasing the capability of the density of what we can send to space," explained DiMarzio, the company's vice president of business development, "[which means] sending more stuff that can do more things in a cost-efficient package."