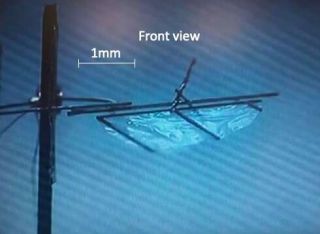 The wing of the "fruit fly microbot."
(Image: © Palak Bhushan and Claire Tomlin. )

Researchers have developed teeny, tiny microrobots that might one day jump and flap their wings on far-off worlds.

As part of his thesis, under the supervision of professor Claire Tomlin, University of California, Berkeley, doctoral student Palak Bhushan designed two microbots: one that flaps its wings and one that jumps. The little bots are modeled after the biological movement of insects.

As Bhushan told Space.com, he wanted to "bridge the gap" between mechanical and biological systems. According to Bhushan, the "wing-flapping" bots, known as the "fruit fly bots," were inspired by the movements of fruit flies and honeybees.

"One of the very good applications that we see her is for exploration … especially in the context of interplanetary exploration," Bhushan said. On the surface of objects like planets, asteroids and comets, "microrobots make a lot of sense," he added.

Because they are so small — the flying bot weighs under 1 milligram and the jumping bot weighs 75 milligrams — the microbots wouldn't be heavy and therefore difficult and expensive to transport. Tiny robots could also be more capable of landing on and exploring difficult terrain, Bhushan said.

Craft like NASA's Curiosity rover have landed on Mars in locations specifically chosen, in part, because they are considered safe, posing a low risk of damaging the craft. Microbots as small as the ones designed by Bhushan could theoretically land in locations that larger craft cannot. That's because, as Bhushan explained, if NASA sent a fleet of 1,000 or even 10,000 of these little bots, it wouldn't matter so much if a few, or even a few hundred, of the microbots crashed or were injured during landing.

Additionally, their small size might mean that they land a little bit more softly. "When dinosaurs used to fall, it was very catastrophic for them," Bhushan said, comparing the relatively soft landing of a tiny robot to the landing of something larger, like a big spacecraft (or a dinosaur).

Because of its dense atmosphere, Titan would be an ideal location for the wing-flapping bot. It "will make a lot of sense for these kinds of environments, because they will need less energy to go from Point A to Point B," Bhushan said. On places like the moon or an asteroid, where there is very little or no atmosphere and there's low gravity, the jumping robot might make the most sense, "because it can jump up to great heights using little energy," Bhushan said.

On Mars, jumping and wing-flapping robots might be equally useful, Bhushan said. The Martian atmosphere is thin, but Bhushan said he expects that it will be enough for the flying bot and that the low gravity will be good for the jumping bot.

Bhushan suggested that future "swarms" of microbots like the ones he designed might work best aboard large rovers that the small robots use as a sort of "home base." Because they are so small and wouldn't be able to support a large antenna, the small bots would have a limited communication range. So, instead of communicating directly with Earth, these tiny bots would communicate with their "home rover," where they would also send data and possibly even samples.

The 75-milligram jumping bot measures 17 x 6 x 14 millimeters. It can jump up to 8 millimeters six times per minute and, like a cat, it lands perfectly on its "feet." Each jump uses up 6.4 milliwatts of power. Because this jumping bot is much larger than its wing-flapping counterpart, it can carry an onboard power source. To cut down on weight and to keep things small and simple, the researchers designed the bot to operate with a single motor and a simple on/off control.

The motor stores energy that is then rapidly released, allowing the bot to jump. Like the "fruit fly bot," this jumping bot is the smallest of its kind, the researchers said.

These microbots are presented in two papers prepublished on arXiv.