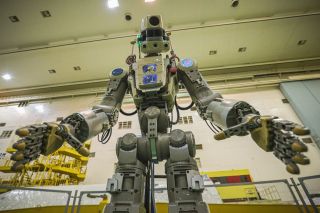 Russia's Skybot F-850: "Not a Terminator" but a space robot, and will launch to the International Space Station on a Soyuz space capsule in August 2019.
(Image: © Roscosmos)

When a Russian Soyuz spacecraft launches from Kazakhstan for the International Space Station tomorrow night, it will carry a single, if strange, passenger — a humanoid robot, sitting in the commander's chair of the crew capsule.

The robot, dubbed Skybot F-850, is one of the latest versions of Russia's FEDOR robots, which have been developed as an all-purpose stand-in for humans in everything from rescue work to driving cars — and now, flying into space.

It's the first time that a robot will take the commander's place in a Soyuz — the Skybot will monitor and report on conditions during the otherwise uncrewed flight, including the forces on the spacecraft as it enters orbit and the start of zero gravity.

Once it arrives at the ISS, the 6-foot (180 centimeters) Skybot will spend almost two weeks working with the ISS crew before it returns to Earth on Sept. 7, according to the Russian space agency Roscosmos.

Alexander Bloshenko, the director of advanced programs and science at Roscosmos, said the first Skybot will serve as a "social companion" and interactive reference guide for Russians on the ISS —  it's already equipped with the space station's operational documentation.

The multifunctional robot can answer questions and hold conversations — and even tell jokes, although only in Russian at the moment.

This is only the start, Bloshenko told Space.com in an email: "Future generations of such robots will solve tasks that are potentially of special risk for humans, such as extravehicular activities and telemetry operations on solar system bodies."

Russia has been developing the FEDOR robots since 2014. Bloshenko said the Skybot version that will fly to the ISS is made from robust materials designed to withstand vibrations during the launch and the demands of operating in space.

Special movement algorithms have also been installed and the actions of the Skybot will be purposefully limited to ensure that it doesn't cause any damage to the ISS by accident, he said.

Artificial intelligence allows the Skybot to move and act autonomously, or it can work in "avatar" mode under the control of an operator wearing a full-body "control suit," Bloshenko said.

The robot's humanoid design, and in particular its advanced robot hands, allow it to work with standard "human" tools: Videos show it walking, turning a valve, unlocking a door, and working a fire extinguisher, an electric drill and a gas torch for welding.

Videos of the robot have shown it driving a car and a quad bike — and even, on one notable occasion in 2017, firing two automatic pistols at targets on a gun range.

That prompted then Deputy Prime Minister Dmitry Rogozin to insist Russia was not developing robots as weapons: "We are not creating a Terminator, but artificial intelligence that will be of great practical significance in various fields," he wrote on Twitter.

The Skybot F-850 may be the first Russian robot on the ISS, but NASA and the European Space Agency (ESA) have been working with robots on the space station for several years already.

NASA's Robonaut 2, a humanoid without legs designed to work alongside astronauts, flew to the ISS in 2011 and performed well until 2014 — but it started having problems after that and was brought back to earth in 2018. It's now being updated, and is expected to return to the ISS next year.

Meanwhile, ESA's roughly spherical "social robot," CIMON — which stands for Crew Interactive Mobile Companion — has flown on the ISS since 2018.

The most advanced robots on the ISS arrived earlier this year, with NASA's Astrobee project.

Two of the cube-like, free-flying robots were flown to the ISS in April, with a third due next month. They are designed to take over from the venerable SPHERES satellites, which have flown on the ISS for over 10 years as an experimental hardware platform.

But the replacement Astrobees are a lot smarter than SPHERES, and they will serve as payload carriers for experiments. In due course they may take over some routine tasks on the ISS, such as instrument surveys and carrying out inventories of equipment.

"Crew time will always be a precious resource during crewed spaceflight," Maria Bualat, the Astrobee project manager,told Space.com. "Assistant robots like Astrobee or Robonaut or the new Russian humanoid are going to help free up astronaut time by taking over some of the repetitive or even dangerous tasks that the crew must currently do."

While the current generation of ISS robots, including the Astrobees and Skybot, were designed to work only inside the ISS, development work was being carried out on robots that could work on the outside, in space itself, she said.

"If you have, like, an external robot, then you can maybe do some repair work, like repairing an external leak without having astronauts suit up and perform an EVA [extravehicular activity]," Bualat said. "So it can also make it safer for astronauts."