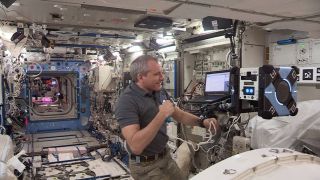 Tiny cube-shaped robots have started flying around and helping out the astronauts on board the International Space Station.

In May 2019, two bread loaf-size robots known as Astrobees launched to the space station aboard an Antares rocket and, just a couple of days later, the station crew welcomed them aboard. The bots, named "Bumble" and "Honey," are designed to be free-flying helpers on the station, assisting astronauts with routine tasks like basic maintenance and finding lost objects. The two Astrobees were recently joined by a third Astrobee named "Queen," which launched on July 25, 2019.

On June 14, 2019, Bumble became the first of the bots to start flying in space. The Astrobees are equipped with a navigation system that uses cameras and sensors to "see" the bots' surroundings and then compares that view with a digital map of the space station to confirm the bots' location and direction. Before Bumble took its inaugural flight, the Astrobee team at NASA's Ames Research Center made sure that the small bot was capable of knowing its location and navigating around the space station.

Canadian Space Agency astronaut David Saint-Jacques then helped Bumble to start flying, manually moving the bot around inside Japan's Kibo laboratory module where the flight would take place. This allowed the bot to observe and calibrate its environment, further ensuring successful navigation.

The Astrobees can fly autonomously or via remote control. Bumble's first flight was remotely managed by flight controllers at NASA's Ames Research Center command. This test showcased some of Bumble's basic capabilities, and NASA plans to continue to challenge the bot with more difficult movements as time goes on. With the results of these test flights, the team behind the Astrobees can tweak the bot to perfect its ability to maneuver and work in the microgravity environment aboard the space station.

Look, no hands! 👏A robot named Bumble became the first #Astrobee robot to fly under its own power in space recently. During tests, the free-flying robot system will help perform routine work alongside astronauts aboard the @Space_Station. More: https://t.co/VcYDicqhhM pic.twitter.com/hBHyQ0rcMVJune 20, 2019

In space, the 12.5-inch-wide Astrobees are propelled by electric fans. They are designed to turn on any axis and move in any direction, and when their battery runs low, they can fly themselves back to their docking station to recharge.

While the robots don't have "hands" to use to help out with tasks on the space station, they do have what's known as a perching arm, which allows them to grab onto station handrails to help with a task or "rest" (conserve battery).

Bots like the Astrobees can cut down on time spent on mundane tasks. Every minute in space is precious for astronauts, and these bots could allow them to have more time to dedicate to more important duties like preparing for spacewalks or working on scientific experiments. In addition to helping out crewmembers, free-flying bots like the Astrobees could also one day be used to remotely repair and maintain structures like the proposed lunar gateway. And, these tiny helpers could one day support missions to Mars and humanity's return to the moon with NASA's Artemis program.