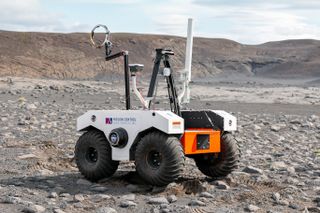 At the foot of Langjokull, Iceland's second biggest glacier, on the black basalt sand of the Lambahraun lava field, scientists and engineers gathered for three weeks this summer to develop and test Martian rover and drone prototypes.

The project, known as SAND-E (Semi-Autonomous Navigation for Detrital Environments), is a collaborative, NASA-funded effort to test these technologies in a Mars-like environment. The tests aim to collect data that will inform the Mars 2020 operations team.

"We're aiming to get this information out as quickly as possible this year so that the [Mars]2020 operations team, when that's selected, will be able to use this information to streamline those operations," Ryan Ewing, an associate professor in Texas A&M University's Department of Geology and Geophysics who serves as Texas A&M's principal investigator for the project, told Space.com.

From July 8 to Aug. 5, the research team tested the prototype rover, which is a small, orange-and-white electric vehicle, and a drone meant to showcase the potential capabilities of the Mars 2020 helicopter, over the lava field.

In testing the drone, the team was able to make high-resolution maps of the surface, and using information collected by the drone, "the scientists were able to quickly make decisions about where they wanted to navigate the rover and which science target they wanted to pick," Ewing said.

According to Ewing, the images and data collected by the drone were much higher resolution than images that might be acquired by a Mars-orbiting satellite. So, while spacecraft like the Mars Reconnaissance Orbiter provide a satellite view for rovers on the surface of the Red Planet, future rovers could get a clearer view with observations from drones flying just above the planet's surface.

Although the Mars 2020 helicopter is currently just a technology demonstration, Ewing suggested that work like this study could help to support future exploration with aircraft on Mars.

The rover has four-wheel drive and  two motors powered by 12 small car batteries. "This rover we have ... (is) basically indestructible," Adam Deslauriers, manager of space and education, at Canada's Mission Control Space Services, said to AFP. "The rovers that we have on Mars and the Moon would be a lot more sensitive to the environment and conditions of Iceland."

Controlled remotely, the 1,257-pound (570 kilograms) rover moves at 7.9 inches (20 centimeters) per second. The rover's pace might seem glacial, but it is much faster than the vehicle would travel on the surface of Mars. This slow pace allows the rover to use its sensors and dual-lens camera to collect data and images as it traverses the Icelandic terrain.

This prototype wasn't able to collect and store samples, like the Mars 2020 rover will be able to do, so the researchers manually collected samples at the sites that the rover traversed.

The team worked in this location because Iceland "is an analog for Mars and for the moon," Ewing said. Scientists believe that, before Mars lost its atmosphere and became the barren, frozen desert it is today, it had many things in common with Iceland. By testing out space tech in places on Earth like Iceland, scientists can "put boots on the ground and test what we think we can do on another world without going there first," he said, adding that they hope that these tests will mitigate risks for future missions using similar tech.

The site where the team tested the robots was especially unique. Located at the bottom of a glacier, "we basically started as close as we could get to the glacier and we would navigate the rover through these active rivers that were beneath the glacier," Ewing said. They were able to "test how the sediment that is generated from glacial erosion and river erosion and wind erosion changes both physically and chemically," he added.

Furthermore, "The mineralogy in Iceland is very similar to what we would find on Mars," Ewing said in a statement. "In addition to that, we don't have much vegetation, it's cold and we have some of the environments like sand dunes and rivers and glaciers that Mars has evidence of in the past."