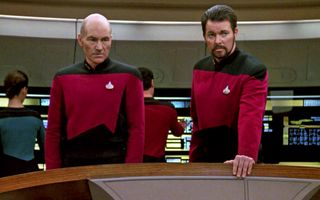 Veteran "Star Trek" actor and director Jonathan Frakes revealed that he would be directing at least some of the new Picard series, speaking on the Writer Experience podcast.

With "Star Trek: Discovery" about to hit the midway point of the show's second season this Thursday, fans are chomping at the bit for as much news as possible about any of the forthcoming new "Star Trek" shows that CBS All-Access has announced. In particular, fans eagerly await the new show focusing on Jean-Luc Picard (Patrick Stewart), set after the events of that captain's "The Next Generation" series.

The announcement comes as no surprise, since Frakes has directed three episodes of "Star Trek: Discovery" — arguably the best ones — together with episodes of "The Next Generation," "Voyager," "Deep Space Nine," the "Star Trek"-inspired "The Orville," two Trek movies and a whole lot more besides.

"Now, my season looks like 'Star Trek: Discovery,' the new wonderful 'Star Trek' series; the Picard show, which Patrick [Stewart] is launching; and 'The Orville,' which is some people's new 'Star Trek.' And I just finished 'The Gifted,' which is a sort of 'X-Men' Marvel origins show. So, I am back in that world," he said on the podcast.

Frakes was asked how "Star Trek" stands up to the expanding "Star Wars" universe, and he evaluated the plans CBS has for the franchise.

"My understanding is that [showrunner] Alex Kurtzman and [his production company] Secret Hideout are creating a 'Star Trek' oeuvre that will hopefully allow fans of Trek to have something fresh to see all the time. That is why 'Discovery,' now that it is a hit, will continue, and they have announced Sir Patrick's show, which is not titled, that will air after 'Discovery.' And they have announced they are developing a show for Michelle Yeoh, so Empress Georgiou, who is a character on 'Discovery,' will have her own stories.

"They have hired the guy from 'Rick and Morty' [Mike McMahan] to write an animated show called 'Lower Decks,' which I have seen parts of that are hysterical. So, you have one, two, three, four. They've got a Nickelodeon connection for a little kids' 'Star Trek,' so that's five. So, there is a world that is being created by Kurtzman and his team that will hopefully continue for many years and provide entertainment, and obviously conversation, about 'Star Trek' for decades."

The first season of the Picard show is expected to have 10 episodes and is set to go into production in mid-April in California, with a planned release in late 2019.

The second season of "Star Trek: Discovery" consists of 14 episodes with no midseason break. It airs on Thursdays on CBS All Access in the U.S. and on the Space TV channel in Canada; the rest of the world can see it on Netflix on Fridays.