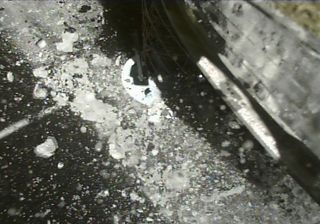 A camera located next to the sampling horn on Hayabusa2 captured this image 4 seconds after the spacecraft touched down on July 10, 2019.
(Image: © JAXA)

The Japanese spacecraft Hayabusa2 made a carefully choreographed second touchdown on an asteroid called Ryugu last night (July 10) — and the photos are incredible.

The images beamed back to Earth show the perspective of two different cameras on board the spacecraft: the main navigation camera and a publicly funded camera pointed past the sampling mechanism.

Photos from the first camera show views of Ryugu's surface at touchdown; the second shows the nearby rock before and after the sampling itself.

Mission staff spent hours carefully lowering the Hayabusa2 spacecraft before it spotted the bright, white target marker it had dropped in preparation for the maneuver. Then, the scientists held their breath and waited as the touchdown itself played out.

That process is dramatic: the spacecraft alights on Ryugu's surface, then fires a bullet made of tantalum (so scientists analyzing the sample can ignore the metal, which isn't found on the asteroid) into the rocky surface. Some of the debris blasted off from the surface by the bullet ends up in the sampling horn built into Hayabusa2, then the spacecraft lifts itself off the surface.

JAXA confirmed that touchdown went smoothly and the bullet fired, suggesting it successfully snagged a sample of material that was buried below Ryugu's surface until April, when the spacecraft deployed a copper bomb to create an artificial crater.

Subsurface material is particularly intriguing for scientists looking to get their hands on asteroid samples because it has been protected from the harsh effects of cosmic rays and charged particles of solar wind blasting through space.

Hayabusa2 will leave Ryugu at the end of this year and spend about a year making the journey back to Earth with its cargo.