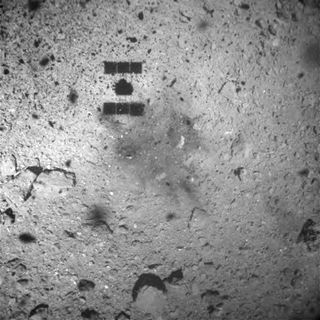 Japan's Hayabusa2 spacecraft snapped this photo just after snagging a sample from the surface of the asteroid Ryugu on Feb. 21, 2019. The dark region near the probe's shadow is the touchdown site, which may have been discolored by Hayabusa2's thrusters and/or material ejected by the "bullet" the spacecraft fired into the asteroid.
(Image: © JAXA, University of Tokyo, Kochi University, Rikkyo University, Nagoya University, Chiba Institute of Technology, Meiji University, University of Aizu, AIST)

The Hayabusa2 spacecraft captured the image on Thursday (Feb. 21), just a minute after it briefly touched down on the near-Earth asteroid Ryugu, blasted a metal "bullet" into the space rock, collected some of the ejected debris and rose into space once again.

Hayabusa2's shadow is clearly visible in the image, which was taken when the probe was about 82 feet (25 meters) above Ryugu's rugged surface. The touchdown site is obvious as well. [Japan's Hayabusa2 Asteroid Mission in Pictures]

"The color of the region beneath the spacecraft’s shadow differs from the surroundings and has been discolored by the touchdown," Japan Aerospace Exploration Agency (JAXA) officials wrote in a description of the photo, which was released yesterday (Feb. 24). "At the moment, the reason for the discoloration is unknown but it may be due to the grit that was blown upwards by the spacecraft thrusters or bullet (projectile)."

Hayabusa2 launched in December 2014 and arrived at the 3,000-foot-wide (900 m) Ryugu in June of last year. The mission is action-packed: The Hayabusa2 mothership dropped two hopping rovers and a lander onto the space rock's surface last fall, and it carries an additional "optional" hopper that may touch down in the near future as well.

And Hayabusa2 will make two more sampling sorties in the next few months. The first of these future operations will be much like last Thursday's operation — fire a bullet, collect some blasted-out material. But the second will slam a large "kinetic impactor" into Ryugu, creating a crater that Hayabusa2 will then sample for pristine, previously subsurface material.

If all goes according to plan, these three samples will come down to Earth in a special return capsule in December 2020. Scientists around the world will then study the asteroid dirt and rubble, looking for clues about the solar system's early history and evolution, and the role carbon-rich asteroids such as Ryugu may have played in life's emergence on Earth. (Such space rocks are thought to have delivered lots of water, as well as organic molecules, to our planet long ago.)

NASA has a similar mission operating now as well. The American space agency's OSIRIS-REx probe arrived in orbit around the 1,650-foot-wide (500 m) carbon-rich asteroid Bennu on Dec. 31 and is expected to grab a sample in mid-2020. The Bennu material will come down to Earth in a capsule in September 2023.