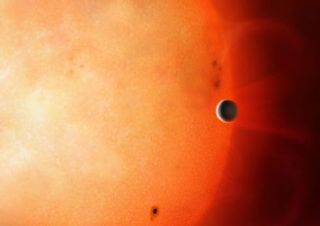 An artistic visualization of a "hot Jupiter" orbiting close to a star.
(Image: © University of Warwick/Mark Garlick)

A newly found exoplanet orbits so close to its parent star that it's close to being torn apart by the tidal forces induced by gravity.

The recently discovered exoplanet NGTS-10b whips around its star in just over 18 hours, making it the shortest orbital period ever observed for a "hot Jupiter" – a large, gassy exoplanet that travels close to the heat of a star. It whirls so close to its star, about 27 times closer to its star than the planet Mercury is to our sun, that it's dangerously close to falling apart.

Scientists found the strange world (which is about 20% larger than Jupiter and twice as massive) about 1,000 light-years from Earth. It popped up in data from the Next-Generation Transit Survey – a Chilean exoplanet survey that looks for large planets. NGTS-10b was found using the transit method, which detects planets when they pass (or transit) in front of their stars, obscuring a tiny part of the  star's brightness.

"In theory, hot Jupiters with short orbital periods – less than 24 hours – are the easiest [planets] to detect due to their large size and frequent transits," lead author James McCormac, a physicist at the University of Warwick in the U.K., said in a statement. "[But] they have proven to be extremely rare. Of the hundreds of hot Jupiters currently known, there are only seven that have an orbital period of less than one day."

NGTS-10b's star is about 70 percent the mass of our sun, but because the two are so close together, the exoplanet experiences temperature extremes on its surface due to its closeness. One side of the planet is perpetually locked to the star, with a scorching surface temperature of about 1,830 degrees Fahrenheit (1,000 degrees Celsius).

The discovery team speculated that NGTS-10b could be an ideal candidate for future study with NASA's James Webb Space Telescope, which is expected to launch in March 2021. One of Webb's science missions is to uncover more about planetary atmospheres, and with that data scientists hope to see how exoplanet atmospheres behave in such strange temperature extremes.

Since gas giant planets usually form far away from their star and migrate inward, the team plans to conduct follow-up observations within the next decade to see if NGTS-10b is in a death spiral, or in a more stable orbit.

A paper based on the discovery was published in the Monthly Notices of the Royal Astronomical Society on Feb. 20.