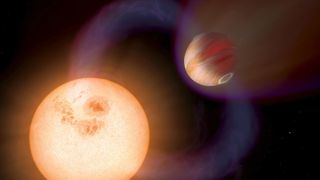 Giant alien worlds known as hot Jupiters get scorchingly close to their host stars, and now astronomers have discovered the most extreme version of such planets to date — one that zips around its star in a little more than 18 hours, a new study finds.

This exoplanet's orbit is likely decaying enough for scientists to actually measure it over the coming decade, researchers added.

In the past two decades or so, astronomers have confirmed the existence of more than 4,000 worlds outside of Earth's solar system. These discoveries have revealed that some of these exoplanets, such as hot Jupiters, gas giants that orbit their stars closer than Mercury does the sun, are very different from those seen in Earth's solar system.

"A hot Jupiter is a large Jupiter-like planet which orbits its star on timescales less than 10 days," study lead author James McCormac, an astronomer at the University of Warwick in England, told Space.com. "In comparison, Jupiter orbits the sun with a period of approximately 12 years."

A few hot Jupiters discovered so far circle their stars closely enough to complete an orbit in less than one Earth day. The close distances between these "ultra-short-period hot Jupiters" and their stars make such worlds ideal targets for astronomers to investigate the nature of gravitational interactions between planets and stars, much like the tidal forces between Earth and the moon.

"Ultra-short-period hot Jupiters — those with a period less than one day — are quite rare," McCormac said.

Now, astronomers have discovered the most extreme ultra-short-period hot Jupiter to date — a world that only takes about 18.4 hours to complete a circuit around its star.

The scientists analyzed this exoplanet, dubbed NGTS-10b, using the Next Generation Transit Survey (NGTS), a robotic array of 12 telescopes at the Paranal Observatory in the Atacama Desert in Chile.

"NGTS was designed to primarily discover Neptune-sized exoplanets," McCormac said. "In the process of discovering smaller planets, we are finding quite a few larger planets also."

This exoplanet orbits NGTS-10, an orange dwarf star about 70% equal to the sun in mass and diameter. The precise distance between Earth and NGTS-10 is not known yet, but the researchers expect it to be about 980 to 1,140 light-years.

There are other worlds that orbit their stars closer than NGTS-10b does its star, "but they are much smaller planets," McCormac said. The current record holder is K2-137b, an exoplanet about 90% the diameter of Earth, which takes just 4.3 hours to completely orbit its red dwarf star, he said.

Although NGTS-10b comes very close to NGTS-10, the star is not especially warm, with a surface about 2,485 degrees Fahrenheit (1,380 degrees Celsius) cooler than the sun's surface. As such, other hot Jupiters can get hotter than NGTS-10b.

NGTS-10b circles perilously near its star, close enough that the researchers expect they can potentially detect its orbit decay over time. They estimated that, if current models of tidal interactions between stars and planets hold true, the time it takes this world to orbit its star will shrink by seven seconds in the coming decade. The scientists suggested that this planet will spiral into the star about 38 million years from now.

"It will be very exciting if we are able to directly measure the orbital decay of the planet," McCormac said.

The scientists detailed their findings online Sept. 26 in a study submitted to the journal Monthly Notices of the Royal Astronomical Society.