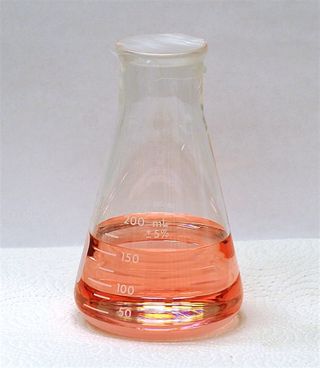 CAPE CANAVERAL, Fla. — SpaceX's next Falcon Heavy launch will carry a satellite designed to test a new type of rocket fuel, the first ever "green" propellant in space. Only it's not so green.

The fuel — a hydroxyl ammonium nitrate fuel/oxidizer mix called AF-M315E — is salmon-colored and, according to NASA, less toxic than caffeine. Carried into space on board a small, boxy satellite, the galactic rosé is part of a technology demonstration mission NASA's dubbed Green Propellant Infusion Mission (GPIM), which is one of two dozen payloads due to launch on Falcon Heavy during a 4-hour window that opens tonight (June 24) at 11:30 p.m. EDT (0330 GMT on June 25); tune in 30 minutes before to watch launch coverage live here on Space.com courtesy of NASA or directly through SpaceX's website.

First developed by the Air Force more than 20 years ago, the fuel is a safer alternative to traditional satellite propellants like hydrazine. That fuel is the drink of choice for satellites and space robots alike, relying on the fuel to maneuver in space; however, hydrazine is incredibly toxic to humans and the environment.

Related: This Is What 2 Dozen Satellites Look Like Packed for Launch on a SpaceX Falcon Heavy

Due to its toxicity and highly flammable nature, simply handling the stuff is dangerous for workers, requiring anyone who comes in contact with the inorganic compound to do so wearing a pressurized full-body hazmat suit. So it makes sense that NASA would want to replace it with something a little more user-friendly — and more planet-friendly, to boot.

Cue AF-M315E: This new pink satellite juice is safe enough to ship via FedEx and offers a massive performance boost (the equivalent of getting 50% more miles per gallon on your car), thanks to its increased density. That means spacecraft can travel farther and operate longer with less fuel on board. (The exact recipe for the fuel hasn't been published, but its ingredients are what give it the charming hue.)

But it also means that it can be used in more types of satellites — like cubesats and other small spacecraft. Typically the size of a shoebox, cubesats are too small to carry efficient propulsion systems. That could soon change.

To prove the viability of the fuel in space, AF-M315E will power a "SmallSat" spacecraft built by Ball Aerospace. Over the course of its planned 13-month mission, the spacecraft will carry out a series of maneuvers to determine how efficient the new propellant is.

If all goes as planned, future spacecraft (large and small) could rely on the peachy fuel to navigate the cosmos.