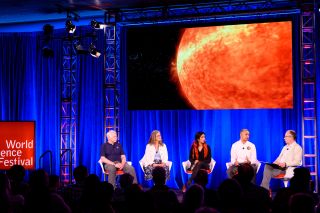 NEW YORK — As auditorium lights were dimming for an event called "Eyes in the Skies," a girl and her mother made their way to a pair of front-row seats.

Twelve-year old Nadia has loved astronomy since the age of 4, she told Space.com. The panel of experts scheduled to speak for this June 2 program were about to explain the missions studying the solar system and beyond, and she seemingly came prepared for the conversation, opening her medium-size spiral notebook and filling several pages with details by the end of the event.

Nadia's mother, Yorldyne Durandisse, was there because of her daughter but enjoyed the event herself, letting out a few "wow" comments throughout the event and occasionally whispering to Nadia to help her get the science right.

The panelists showed unbridled enthusiasm for their work, too — a great match for the awe that mom and daughter expressed. The host of this 2019 World Science Festival event was astrophysicist Caleb Scharf, who asked the panelists to describe their challenging projects: Solar scientist Nour Raouafi is working on NASA's Parker Solar Probe that will approach the sun closer than ever before; systems engineer Farah Alibay works on NASA's Mars 2020 rover and was involved with the InSight (Interior Exploration using Seismic Investigations, Geodesy and Heat Transport) Mars lander studying the Red Planet's internal vibrations; astrophysicist Padi Boyd works on the TESS (Transiting Exoplanet Survey Satellite) mission looking for worlds around other stars; and Earth scientist Jim Irons studies the changes to humanity's home planet with technology like NASA's Landsat-8 satellite.

The conversation that sparked some of the most delighted reactions from the panelists was centered on the iconic Voyager missions.

NASA's Voyager 1 and 2 spacecraft launched in 1977 with the famous Golden Record, and the duo are still sending signals back to Earth despite their incredible distance from the humans who made them, and embarking on a journey through interstellar space. The Golden Record carries sounds from our planet and a set of instructions for any intelligent extraterrestrial lifeform that might someday come into contact with it. "Even though I'm an Earth scientist ... it's inspirational to realize we are able to send manmade … spacecrafts beyond the solar system," Irons said.

"They are probing a part of our solar system that we have no hope of reaching in our lifetime with our own eyes and our hands," Boyd said.

"The building behind my office at [Jet Propulsion Laboratory] ... we call it the center of the universe," Alibay said, "because it's where the Deep Space Network is, which is our network of antennas on Earth that listen to every single spacecraft out there in the solar system and beyond … I walk out there fairly often, and you can see the Voyager 2 data coming down to Earth, and it's a trickle of data."

The data is like the sound of the radio when the dial is too far from the station, Alibay added: The information is washed out by background noise so the spacecraft has to repeat its message multiple times so scientists can make out its transmission.

Light-years away from the Voyager probes are the gaseous exoplanets that have made their presence known to scientists on Earth by passing in front of their parent stars. After cataloguing the signs produced by thousands of these transits, scientists can statistically argue that "there are actually more planets than stars in the galaxy," Boyd said.

Nadia and the handful of children in the audience have lived their whole lives in a world where humans have always been on Mars, and have known for certain that planets exist around other stars: The first exoplanet discovery happened in 1995, and two years later, NASA's Sojourner rover became the first successful robotic explorer of its kind on Mars.

After discussing these tools in space, the topic switched over to space junk.

"Humans are filthy," Scharf said when asking the panel about the challenges of not only keeping Earth's atmosphere clear of debris, but also about the waste produced by a human colony on Mars.

Human debris on the Red Planet is not something we have to worry about as much now because spacecraft land on Mars only a few times each decade, Alibay said, adding that NASA has planetary protection policies in place to prevent microbes from Earth surviving a journey to Mars and spreading. Going forward, "we have to make sure our junk is clean," she said.

Boyd said that practicing methods of containment and other systems on the moon could help prepare for Mars, and that these are great conversations to be having even though any human mission to the Red Planet is a long stretch away.

More frightening news came when Irons showed decadal time-lapses of Landsat imagery. One animation showed receding ice in Glacier National Park. "When [this place] became a national park in 1910, there were about 150 glaciers throughout the park. There are now fewer than 25, and those 25 glaciers are retreating every year about 2 to 3 acres per year," Irons said. He also showed imagery of forest disturbance caused by mining, and linked the reduction of this greenery to higher levels of greenhouse gases in the atmosphere.

Nadia jotted down notes from the panelists' discussions throughout the event and seemed impressed by the variety of the topics. When "Eyes in the Skies" wrapped up, she said she "like[d] how they went more in-depth in concepts: How you could learn certain things, but then, instead of thinking of it as a whole, you go into different pieces of that certain topic, and I like how they did that ... it was very informing."

Yorldyne seemed to be a science enthusiast, because of how often she leaned in to help her daughter take down the right words. Space.com asked her if she would call herself a science buff, too, to which she replied no — "But, I do pay attention because I know that she is."