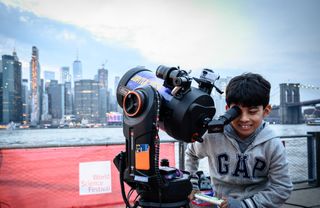 NEW YORK — Hundreds of people gathered near the New York City waterfront to enjoy some science and summertime weather as part of the 2019 World Science Festival.

Saturday (June 1) was the perfect day to be outside: cool enough for long strolls through Brooklyn Bridge Park — where the festival held its "Saturday Night Lights" public event — and nice enough to sit out on a park lawn well after sunset. This was, in part, due to humidity. Unfortunately, the cloud coverage that supplied the nice temperature was not ideal for gazing through telescopes, but the line forming to use the eyes to the skies never shortened.

The four-hour event changed thematically throughout the night, and the crowd reflected the variety: children accompanied their parents to get a photo with astronaut Yvonne Cagle; a few couples stopped and cozied up after coming across the audiovisual presentation "Deep Field: The Impossible Magnitude of our Universe" that featured romantic imagery of planets and galaxies; dog owners became so enthralled by the presentations that their furry companions began staring matches with one another; families came out to support their young ones singing in a special choral performance; and at least one quantum physicist was there to enjoy the whole event.

Related: Best Telescopes for the Money - Reviews and Guide

"Deep Field" composer Eric Whitacre addressed the crowd to explain the inspiration behind his music, which was played over speakers and then came to life with the vocal talents of the LaGuardia High School Senior Chorus. The title refers to the iconic composite image created by 342 consecutive exposures, taken over the course of more than 100 hours, by the Hubble Space Telescope. The Hubble Deep Field North image includes almost 3,000 galaxies; that 1995 image was followed-up one year later by the observations that were used to create the Hubble Deep Field South image. In 2004, the telescopic spacecraft imaged an astounding 10,000 galaxies in its Hubble Ultra Deep Field image.

Following the audiovisual performance, Whitacre interviewed two NASA scientists, and asked them to pick their favorite Hubble endeavor. "That's like asking someone to pick their favorite child," replied Kimberly Arcand, Visualization Lead for NASA's Chandra X-ray Observatory. "If I had to pick one thing, that favorite child of Hubble, I might have to say anything on exoplanets because when Hubble was being built and launched, exoplanets as a study [wasn't] a thing really; they hadn't been detected yet… and just the fact that Hubble has been able to give so much science and goodness to the study of planets outside our solar system just blows my mind." In 2017, Hubble found a stratosphere on a huge exoplanet.

The festivities also included presentations by science communicators like Jupiter Joe, who at one point described the size of the moon's Copernicus crater as roughly the distance between Newburg, New York, and Manhattan's southern tip, which the audience could view from across the bay.