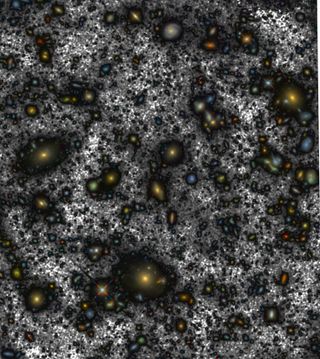 The new version of Hubble's deep image. In dark grey is the new light that has been found around the galaxies in this field. That light corresponds to the brightness of more than 100 billion suns.
(Image: © A. S. Borlaff et al.)

One of the Hubble Space Telescope's most famous images peered even deeper into the cosmos than scientists had thought.

That photo is the Hubble Ultra-Deep Field (HUDF), which combines hundreds of images taken by the space telescope over multiple years into the deepest view of the universe ever created. The composite pic of a small patch of sky contains a whopping 10,000 galaxies, astronomers have estimated. (The HUDF also refers to that patch of sky, not just imagery of it.)

"What we have done is to go back to the archive of the original images, directly as observed by the HST, and improve the process of combination, aiming at the best image quality not only for the more distant smaller galaxies but also for the extended regions of the largest galaxies," study leader Alejandro Borlaff, from the Instituto de Astrofísica de Canarias (IAC) in the Canary Islands, said in a statement.

The new work revealed that some of the galaxies in the HUDF view are nearly twice as big as previously thought, study team members said.

The Hubble Space Telescope launched to Earth orbit in April 1990 aboard NASA's space shuttle Discovery. The scope got off to an inauspicious start; its initial images were blurry, a problem that mission team members traced to a slight flaw in Hubble's primary mirror.

Spacewalking astronauts fixed that problem in December 1993, giving Hubble the sharp focus it's known for today.

That was the first of five servicing missions that repaired, maintained and upgraded the telescope over the years. The most recent of these, which occurred in May 2009, installed what is today Hubble's main eye on the universe, an instrument called the Wide Field Camera 3 (WFC3).

The HUDF image has long been a work in progress. The first version combined data gathered by Hubble from late 2003 to early 2004; later updates have incorporated additional imagery in various wavelengths of light.

The new study, which was published this month in the journal Astronomy & Astrophysics, looked at the 2012 incarnation of the HUDF, which relied heavily on data gathered by the WFC3.