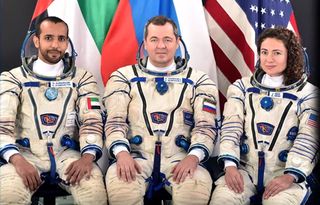 The secrets of the universe are so important that NASA plans spacewalk work to fix a dark matter experiment on the space station, U.S. astronaut Jessica Meir said in a news conference on Monday (July 15).

Meir, who will launch to the International Space Station on Sept. 25 as a part of Expedition 61, said her crew will likely participate in several spacewalks during her half-year mission. The spacewalkers will address some issues with the Alpha Magnetic Spectrometer (AMS), a particle detector outside the orbiting laboratory that is scanning the cosmos for evidence of dark matter.

One of the AMS pumps is degrading, and NASA has had to implement some new procedures and tools to fix the issue. That's because the pump wasn't originally designed to be repaired by astronauts, Meir said in the televised news conference from NASA's Johnson Space Center in Houston.

AMS has been operating since 2011, after the second-to-last space shuttle flight brought the instrument to the International Space Station (ISS). The experiment is meant to help scientists better understand dark matter, a type of matter that cannot be directly sensed by telescopes except via its interactions with normal matter. Dark matter is thought to make up about 85% of the matter in the universe.

"It will be a complex and challenging spacewalk," said Meir, who compared the outing to the series of excursions five astronaut crews completed to repair and upgrade the Hubble Space Telescope over two decades. Hubble remains in excellent health after the last such upgrade, in 2009, and the telescope is expected to keep operating even after its successor, the James Webb Space Telescope, launches in 2021.

Meir, a first-time space traveler, will share the Soyuz spacecraft with veteran Russian cosmonaut Oleg Skripochka and new spaceflight participant Hazzaa Ali Almansoori of the United Arab Emirates. Almansoori will spend only eight days at the orbiting laboratory, while his crewmates will spend about six months in space. He will return to Earth with two Expedition 60 crewmembers who arrived at the ISS in March: NASA astronaut Nick Hague and Russian cosmonaut Aleksey Ovchinin.

Almansoori, who will be the first Emirati citizen in space, said he was in awe that he has the chance to fly. "This is a great milestone for me and my country as well," he said at the news conference. He recalled looking at the stars as a child, adding that he never thought he could be an astronaut.

"But I'm living the impossible now," Almansoori said, adding that he plans to share the experience with as many Emirati youth as he can during his time in space. The hope is that the Emirati astronaut program can continue with more missions after this one, he said.

Skripochka will be on his third long-duration visit to the orbiting complex, following Expeditions 25/26 in 2010 and Expeditions 47/48 in 2016. He will be flying in an upgraded version of the Soyuz spacecraft this time, and he said he will have a "new level of responsibility" commanding the spacecraft. "You have a lot of new scientific equipment onboard," he added.

The Expedition 61 crew will work on approximately 300 experiments in space, along with their suite of spacewalks. Meir said some of these experiments will examine sticky problems NASA has faced with astronaut health, such as changes in astronaut vision and hardening of the carotid artery (a major blood vessel that supplies blood to the brain). The agency is working to address these issues as it prepares for possible longer-duration missions to the moon in 2024 and, eventually, to Mars.

Meir, at 42 years old, is young enough to likely participate in NASA's next suite of missions to more-distant destinations. When asked about the agency's goal of placing the first woman on the moon, she said, "I'd love to be that woman." But, she added quickly, any woman in NASA's Astronaut Office would say the same, so she will have to see how the schedule plays out.

Another expected highlight of the mission is the arrival of the first Boeing Starliner spacecraft, which will eventually carry astronauts to the space station. A Crew Dragon commercial spacecraft from SpaceX may also travel to the space station during Meir's stay, possibly carrying some astronauts onboard. But that will depend on how development proceeds. "We'll see how the calendar plays out," Meir said.

Astronauts have tightly scheduled days on the space station, leaving little time for leisure. But Meir already knows what she wants to do with her precious free minutes. She will take photographs of places she used to live, as well as of key hiking areas, in honor of her passion for the outdoors.

She also has an opportunity to do some outreach and speak with researchers in the Antarctic. This has special meaning to Meir, she said, since she got to talk to the space station during graduate school while she studied penguins. "It's hard to get good [connection] visibility" to Antarctica with the space station orbit, she said, although the crew will try their best to get through.