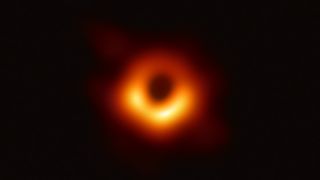 The Event Horizon Telescope, a planet-scale array of eight ground-based radio telescopes forged through international collaboration, captured this image of the supermassive black hole and its shadow that's in the center of the galaxy M87.
(Image: © EHT Collaboration)

For that, the team will need to involve more instruments in the project, and the Event Horizon Telescope just got money to start making that happen. The grant of $12.7 million comes from the National Science Foundation, which is a long-term funding source for the black hole imagery project.

"The spectacular … results have surpassed our wildest expectations, and I am deeply proud of what we achieved as a team," Shep Doeleman, the founding director of the Event Horizon Telescope and an astronomer at the Harvard-Smithsonian Center for Astrophysics, said in a statement. "Now the question one hears the most is, 'What's next?'"

The answer is a moving image of a black hole, rather than a static snapshot. That type of data will be particularly beneficial when it comes to understanding a crowd-favorite supermassive black hole, the one at the center of the galaxy we live in.

"Our own Milky Way is host to a supermassive black hole that evolves dramatically over the course of a night," Katie Bouman, a computer scientist at Caltech who is involved in the Event Horizon Telescope, said in a statement. "We are developing new methods, which incorporate emerging ideas from machine learning and computational imaging, in order to make the very first movies of gas spiraling towards an event horizon."

The Event Horizon Telescope project pulls together observatories around the globe to simulate a telescope as large as Earth. In April 2017, eight instruments contributed observations of the supermassive black hole at the heart of a galaxy called M87. It was this data that informed the image released earlier this year.

The project has already grown, with a ninth telescope joining in observations gathered in 2018 of the supermassive black hole at the center of the Milky Way. Two other instruments were due to join the project by 2020, but the additional funding means that the team can look into adding even more facilities, sharpening the resulting images.

The Event Horizon Telescope team plans to use the money to incorporate the Owens Valley Radio Observatory in California and to upgrade instruments on the Large Millimeter Telescope Alfonso Serrano in Mexico, which took part in the 2017 observations.

The funding will also support evaluating locations for potential new facilities, potentially doubling the number of instruments involved in the project. The observations involved are finicky, turning out best when taken from high-altitude, dry locales.

But these future instruments could look very different from those involved in the first black hole image. The Event Horizon Telescope team will use some of the new funding to evaluate the potential science returns of using smaller dish facilities, which would be cheaper to build and would not necessarily need to piggyback on existing observatories.

Project scientists will also use the money to explore ways of recording and analyzing still larger amounts of data, and to develop improved algorithms that could produce the moving images scientists want in order to better understand active black holes. The overhauled Event Horizon Telescope could also help scientists understand the relativistic jets that spew matter away from black holes.

The upgraded project could make its first observations in the late 2020s, according to the Event Horizon Telescope group.

"Despite decades of study, some of the most basic questions about black holes remain untested," Michael Johnson, a co-investigator of the project at the Harvard-Smithsonian Center for Astrophysics, said in a statement. "With the [next-generation Event Horizon Telescope], we will be able to study how black holes act as powerful cosmic engines, energizing a swirling bath of infalling plasma and efficiently pouring unimaginable amounts of energy into narrow jets that pierce entire galaxies."