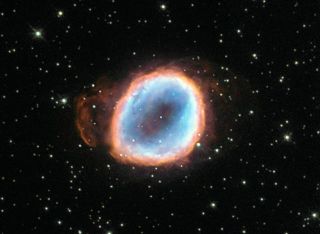 A "dying" star's last moments, captured by the Hubble Space Telescope. Over thousands of years it will cool and shrink until it becomes a white dwarf. One new study shows how the surviving cores of planets orbiting white dwarfs could emit radio waves, allowing scientists to detect them from Earth.
(Image: © NASA/ESA)

The surviving cores of planets orbiting dead stars emit radio waves that scientists can detect from Earth for up to a billion years, one new study has found.

Stars become white dwarfs when they've exhausted all of their fuel and shed their outer layers, essentially "dying." When these stars die, they typically destroy nearby objects and destroy the outer layers of the planets that orbit them. However, according to this new study, led by Dimitri Veras, an astrophysicist at the University of Warwick, the surviving cores of planets orbiting white dwarfs could still emit radio waves that allow scientists to detect them from Earth.

This work could lead to a major first in exoplanet detection. "Nobody has ever found just the bare core of a major planet before, nor a major planet only through monitoring magnetic signatures, nor a major planet around a white dwarf. Therefore, a discovery here would represent ‘firsts’ in three different senses for planetary systems," Veras said in a statement.

According to this study, the magnetic field between a surviving planetary core and the white dwarf it orbits can form what's known as a unipolar inductor circuit. This circuit forms when a metallic object rotates in a magnetic field and creates an electrical current.

Radiation from this circuit emits as radio waves, which is what researchers can observe with radio telescopes. In addition to detecting "dead" planetary systems, this phenomenon also allows researchers to study Jupiter and its moon Io, which also form a unipolar inductor circuit.

Now, not all planetary cores surrounding white dwarfs will survive, let alone emit radio waves "There is a sweet spot for detecting these planetary cores: a core too close to the white dwarf would be destroyed by tidal forces, and a core too far away would not be detectable.

Also, if the magnetic field is too strong, it would push the core into the white dwarf, destroying it. Hence, we should only look for planets around those white dwarfs with weaker magnetic fields at a separation between about 3 solar radii and the Mercury-Sun distance," Veras said.

In modelling these systems with planetary cores orbiting white dwarfs, these researchers found that, even after being stripped of their outer layers when their stars die, these cores can survive for over 100 million years, and could even survive as long as a billion years.

In the early 1990s, scientists discovered the first exoplanets by detecting radio waves from the stars that they were orbiting. This research team hopes to further exoplanet discovery and exploration by discovering planetary cores by detecting their radio waves. Following this study, the research team hopes to detect and study planetary cores orbiting white dwarfs using radio telescopes like the Arecibo Observatory and the Greek Bank Telescope.

"A discovery would also help reveal the history of these star systems, because for a core to have reached that stage it would have been violently stripped of its atmosphere and mantle at some point and then thrown towards the white dwarf. Such a core might also provide a glimpse into our own distant future, and how the solar system will eventually evolve," Veras said.

This study was published June 21, 2019 in the Monthly Notices of the Royal Astronomical Society.