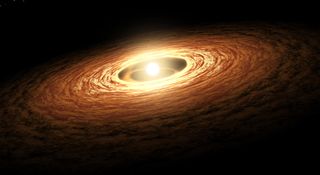 An artist's image of a young, sunlike star surrounded by the gas and dust that will eventually form planets.
(Image: © NASA/JPL-Caltech)

The early solar system was a violent, chaotic place, with debris slamming into growing planets. Sometimes, the material would fall onto a planetary embryo, and other times, it would obliterate the would-be world. Now, new research into these collisions is helping to shine light on how planets came to be — or didn't — in the early solar system.

Planetary models are incredibly complex, requiring scientists to account for everything that happens to a growing planet on timescales spanning a few days to millions of years. In the past, astronomers would simplify their models of colliding objects by assuming that all of the material from both the impactor and its target perfectly merged into a single object — an unrealistic expectation, since at least some pieces would most likely be flung into space and lost. But because computers of the past were less powerful than those today, scientists were forced into the simplification.

In the past decade, however, improvements in computational power have allowed researchers to begin studying more-realistic collision scenarios. Now, scientists can model so-called hit-and-run collisions, where two bodies scraped each other in passing, or even the total annihilation that could occur when two planetary embryos slammed together. These imperfect "dirty collisions" not only affect how large planets grow to be but also help to explain their orbits.

Related: How Did the Solar System Form?

"Accounting for hit-and-run impacts and the gravitational perturbations of ejected fragments in our models lead to more realistic final orbits for Earth and Venus," lead author Matt Clement, a planet modeler at the University of Oklahoma, told Space.com by email.

How the giants danced

The dance of the giant planets (Jupiter, Saturn, Uranus and Neptune) soon after the birth of the solar system remains a mystery. In the past, astronomers thought the planets all formed roughly where they orbit today, but the first exoplanet discoveries caused a paradigm-shift as scientists realized that planets often migrate soon after their birth. In-depth solar system observations revealed that things hadn’t been so placid in its early lifetime. The shape of the Kuiper Belt (a region at the edge of the solar system), the presence near Jupiter of small icy fragments from the outer solar system, and the unexpectedly small size of Mars provide evidence for the outer planets' weren’t born where they orbit today. For decades, scientists have worked to glean information about where the planets started out and how they interacted with each other in their early days.

Planets form from the disk of gas and debris left over after their star has formed. Gravitational forces pull the pieces together to create the planets. Once a large planetary nucleus forms, it can gobble up gas from the disk faster than its smaller terrestrial siblings, expanding rapidly. Less massive rocky worlds gather gas more slowly and end up with smaller, inconsequential atmospheres compared to the giants. But what happens after the gas is gone, gobbled up by the planets or blown away by stellar radiation?

Enter the Nice model — pronounced like Nice, France, where the theory first emerged — the current leading contender for planetary formation. In 2005, researchers suggested that Neptune and Uranus formed closer to the sun, with Neptune the innermost planet of the pair. The two tugged at each other gravitationally, pulling them outward and eventually causing them to swap places. Along the way, they hurled icy debris from the Kuiper Belt inward, towards the smaller terrestrial planets.

Originally, scientists proposed that this dance took place about 3.9 billion years ago, only 450 million years after the planets finished forming. That delay would have allowed the material thrown inward to line up with the Late Heavy Bombardment (LHB) period, a proposed spike in the amount of debris that hit the Earth-and-moon system 4.1 to 3.8 billion years ago. But in recent years, evidence has begun to suggest that the LHB may not have happened after all.

The LHB idea first emerged during the Apollo era, when samples collected from various places on the lunar surface seemed to suggest that all of the major basins were about 3.9 billion years old. In a simple solar system, the amount of debris from planet formation slowly wanes as it crashes into planets, falls into the sun or is ejected into interstellar space. So, the apparent spike in collisions came as a surprise to scientists.

"Now that we have better imagery of the sites, it is clear that Serenitatis is highly contaminated with debris from Imbrium, and likely much older," Clement said.

In a previous study, Clement and his colleagues found that this late instability didn't bode well for the terrestrial planets. Collisions between rocky worlds often destroyed them, and Mars and Mercury were frequently ejected from their orbits.

With evidence mounting that the dance of Uranus and Neptune happened almost immediately after the gas vanished, Clement and his team decided to model planetary formation with more detailed collisions.

When a small object runs into a larger one, almost all of its material is engulfed by the giant. But when two objects are closer in size, it gets trickier. Debris spinning off can affect how much material falls onto the planet as well as carry away angular momentum. That can provide a push that makes the planet's orbit circular.

"In the actual solar system, the orbits of the terrestrial planets — especially Earth and Venus — are remarkably circular and co-planer compared to the results of formation models that predict far more elliptical orbits," Clement said.

The terrestrial planets in our solar system also have a low inclination, or the angle between a planet's orbital plane and the sun's equator.

"By including collisional fragmentation, we can do a better job at reproducing the low orbital eccentricities and inclinations of Earth and Venus, as well as the inferred geological growth times of all the planets," Clement said.

In the previous century, astronomers struggled with the "small Mars" problem. In models of the solar system's formation, the Red Planet was substantially larger than it is today. But Mars is only about 10% the mass of Earth, though the pair formed under similar conditions and out of much of the same material.

"When the solar system was very young, Mars grew to its present size in just a few million years and, for some reason, stopped getting bigger," Clement said. "All the while, Earth and Venus continued to grow larger for another 100 million years or so."

The Nice model provided one potential explanation to overcome that hurdle by scrambling the inner solar system. As the ice giants dance in the outer solar system, their orbits become more elliptical. All of the inner planets feel the effects, but because Mars is the closest to the giant worlds, it and the asteroid belt feel this dance most.

But when it formed, the Red Planet isn't alone in its orbit. Instead, it was surrounded by several similarly sized siblings, according to previous simulations. The instabilities from the giant planets toss many of these Mars-like objects out of the solar system, preventing them from coming together to make a larger world.

"In many cases, the system finishes with just one Mars-sized object near Mars' modern orbit, which did not grow after the instability ensued," Clement said. "Earth and Venus, however, are less perturbed by the giant planets and continue to grow."

The authors intend to continue studying the evolution of the leftover fragments. They hope that comparing them with impacts on the lunar surface will reveal insight into how the planets formed, as well as provide clues about the asteroid belt's evolution.

The research was published in the journal Icarus.