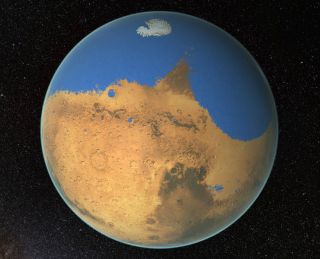 Scientists think much of Mars was covered by a vast ocean in the ancient past.
(Image: © NASA/GSFC)

A storm of cosmic impacts may have ended relatively early on Mars, suggesting that the Red Planet was habitable longer than scientists previously thought, a new study finds.

The early days of the solar system often saw giant collisions between the newborn planets and roaming pieces of rock. Left over from planetary formation, these chunks would go on to become the asteroids. Previous research suggested that the debris from one such impact, between Earth and a Mars-size rock named Theia, coalesced to form the moon.

Prior work also suggested that as the solar system's gas giant planets migrated to their current places around the sun, their gravitational pulls may have hurled a final barrage of rocks at the worlds of the inner solar system, a violent epoch about 3.8 billion to 4 billion years ago dubbed the Late Heavy Bombardment. However, scientists have not only hotly debated when this era might have started and stopped, but also whether it happened at all.

Related: The Search for Life on Mars (a Photo Timeline)

Knowing how much pummeling Earth and Mars experienced during those times could shed light on the conditions under which life may have developed. Now, after analyzing the oldest known sample of planetary crust in the solar system, researchers said the Late Heavy Bombardment may not have occurred, suggesting that both planets were capable of hosting life starting earlier than often previously thought.

The scientists analyzed mineral grains from meteorites that crashed in the Sahara Desert. The impact that blasted these rocks off Mars likely happened within the past 20 million years, said study lead author Desmond Moser, a geochronologist at the University of Western Ontario in Canada.

Previous research found that these meteorites possess the oldest known samples of Mars.

"Little bits of rock within these meteorites are the oldest known pieces of planetary crust in the solar system," Moser told Space.com. "These are the oldest and most primitive parts of Mars that anyone has ever seen."

Specifically, prior work suggested that grains of zircon and other minerals up to nearly 4.48 billion years old within these meteorites likely came from the southern highlands of the Red Planet.

"We know that Mars has weird differences between its hemispheres when it comes to the age and thickness of the crust," Moser said. "Back in the '80s, scientists proposed [that] this hemispheric difference might be due to an impact Mars had with a giant object about 1,000 kilometers [600 miles] in size, much like the object that collided with Earth to form the moon."

Cosmic impacts generate high pressures and temperatures that leave telltale signs within rocks. Using electron microscopy and atom-probe tomography, the researchers found that nearly all the ancient mineral grains within the Martian meteorites lacked the features one would expect from a cosmic impact's shock waves. In contrast, more than 80% of all mineral grains from impacted areas on Earth and the moon possess these shock features.

As such, the researchers suggested that any cataclysmic impacts on Mars ended after the ancient minerals in the meteorites formed, which happened up to nearly 4.48 billion years ago. Moreover, even if giant impacts did occur on Mars after that time, perhaps they did not occur on Earth, study team members said.

All in all, Moser and his colleagues proposed that there was no Late Heavy Bombardment that sterilized the early planets. If this is true, habitable pressures and temperatures might have developed by 4.2 billion years ago on both Earth and Mars.

Future research may use these findings to help in the search for signs of early life on Mars.

"This may point out good places to get samples returned from Mars — if not in the first missions, then other missions," Moser said.

The scientists detailed their findings online June 24 in the journal Nature Geoscience.