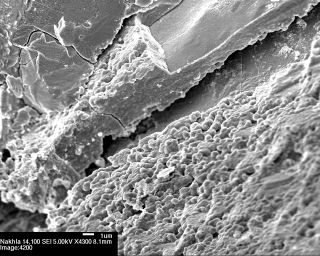 A close-up view of the Martian meteorite Nakhla, which fell in Egypt in 1911.
(Image: © NASA)

Organic molecules — compounds that on Earth can be linked with life — encased within meteorites from Mars may have formed on the Red Planet from chemical reactions much like those found in batteries on Earth, a new study finds.

Scientists cautioned that these findings do not mean there is life on Mars. Instead, they may show a new way for the "building blocks of life" as we know it to have formed on the Red Planet.

Organic molecules are the carbon-based chemicals that such building blocks of life as proteins and DNA are made from. Previous work detected organic compounds in Martian meteorites, but researchers had long debated what the origins of these molecules are. [Photo Gallery: Images of Martian Meteorites]

In 2012, scientists discovered evidence that organic molecules in a number of Martian meteorites came from Mars and were not contaminants from Earth. However, they also found that these organic compounds did not have a biological origin — the researchers theorized that they formed from volcanic processes.

To shed further light on the origins of these organic molecules, researchers investigated three Martian meteorites. These were Nakhla, which fell in Egypt in 1911; Tissint, which fell into the Moroccan desert in 2011; and NWA 1950, which was found in the Atlas Mountains in Morocco in 2001.

Microscopic analysis revealed that organic molecules in these rocks were often intertwined with minerals such as titanomagnetite, magnetite, pyrite and pyrrhotite, according to the researchers. The kinds of organic compounds found in these meteorites were highly similar to ones detected on the Red Planet by the Mars Science Laboratory's Curiosity rover missions.

The scientists noted that titanomagnetite is a catalyst, able to trigger chemical reactions. Given the specific molecules the researchers found near each other within the meteorite, they suggested that on Mars, titanomagnetite catalyzed reactions between volcanic minerals,salty liquids and carbon dioxide dissolved in the briny fluids, creating organic matter. These reactions are similar to ones that regularly happen in batteries.

Prior work that sought to generate useful chemicals from the carbon dioxide in Earth's atmosphere showed that such reactions were possible. However, this activity "was never thought to exist in nature, though," study lead author Andrew Steele, an astrobiologist at the Carnegie Institution for Science in Washington, D.C., told Space.com.

All in all, "this does not say there is life on Mars, but shows a novel way of making the building blocks of life," Steele said. These findings may shed light on "the reactions that led to life on the early Earth," he added.

The scientists are now exploring what organic chemicals these reactions might produce on Mars. "Preliminary experiments have already produced methane in the lab," Steele said.

Future exploration of Mars and analyses of samples from the Red Planet may help determine whether these reactions actually occur there, the researchers added. If confirmed, this work may help uncover what background of organic material might exist on Mars so "we can differentiate possible Martian life from just organic chemistry," Steele said.

The scientists detailed their findings online Oct. 31 in the journal Science Advances.