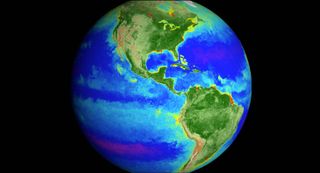 NASA's scientists are applying climate models developed on Earth to understand what other worlds might be able to host life.
(Image: © NASA's Goddard Space Flight Center)

Say what you will about winter's chill and summer's burn — Earth's climate is pretty great for life as we know it.

But scientists have much less data about what the climates of alien worlds could be like, and astronomers don't have a way to get a whole lot more data anytime soon. That's inconvenient, since climate will inevitably shape whether life can exist on these exoplanets and in what way. To try to bridge the gap, scientists are taking models of how Earth's climate works and applying them to other worlds.

"The models make specific, testable predictions of what we should see," Karl Stapelfeldt, an exoplanet scientist at NASA's Jet Propulsion Laboratory in California, said in a statement. "These are very important for designing our future telescopes and observing strategies."

That's because scientists know it will be a long, long time before they can see any life in other solar systems directly. Even studying the atmospheres of these worlds is extremely difficult, although projects such as NASA's James Webb Space Telescope will increase astronomers' capabilities to do that.

So, for worlds with atmospheres, curious scientists are trying to figure out how the details of an exoplanet influence that bubble of gases. What happens if a planet is tidally locked, with one side in eternal day and one in eternal night? What happens if its surface is all land or all ocean, or a mix of the two?

And that's where climate models come into play. By tweaking an Earth model, scientists developed ROCKE-3D, a "planetary simulator." They can feed different combinations of exoplanet characteristics into the model and then see what happens in the atmosphere and how the results might affect habitability.

For example, based on what scientists know now about Proxima b, which orbits in the nearest star system to Earth, they suspect the planet is tidally locked. But ROCKE-3D analysis suggested that, depending on other details of the world, clouds could cluster on the permanently sunny side of the planet, making the temperature less scalding.

Conclusions like these could change the way scientists prioritize different exoplanets for precious observation time by future instruments, according to NASA. That's the downside of the wealth that exoplanet scientists have reaped: With more than 4,000 discoveries already, there are far more worlds than instruments will ever have time to study.

"If we want to observe most wisely, we have to take recommendations from climate models," Anthony Del Genio, a planetary climate scientist who recently retired from NASA's Goddard Institute for Space Studies in New York, said in the statement. "That's just increasing the odds."