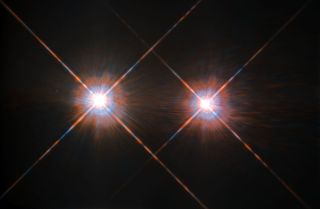 Jared Males, Project Blue advisor and an astronomer at the University of Arizona, contributed this article to Space.com's Expert Voices: Op-Ed & Insights.

There's a good reason humanity hasn't yet seen pictures of an Earth-like exoplanet. Getting such an image is not as easy as pointing a telescope at a distant star and snapping a photo. A tremendous amount of scientific work goes into isolating a clear image of a planet outside this solar system.

Earthlings have actually never seen exoplanets like the planets in our own solar system in light visible to human eyeballs. But scientists have obtained several images of distant, young gas giants in the infrared. Young gas giants are easier to photograph, because they're much bigger than rocky planets and give off light as they cool down from formation. [How Do You Spot an Alien Planet from Earth? (Infographic)]

Here's an infrared image of the HR 8799 system, as seen by the Keck telescope. You can see four planets orbiting the star.

While it looks simple, in reality, an image like this probably took weeks or months to produce after scientists obtained the data. During that time, astronomers sifted through mountains of data, trying to separate the signals from the noise. It would have taken countless hours for the researchers to safely determine that those bright little dots are indeed planets.

What causes all that noise? It depends on if your telescope is space- or ground-based, but each type brings its own challenges.

I work at the Steward Observatory at the University of Arizona. My specialty is adaptive optics, which is basically the science involved in making pictures clearer. When looking at distant objects, we need images to have really high resolution. Most people think about resolution as the number of pixels on a screen. But in astronomy, it has a very specific definition. That is: If you're looking at two distinct objects that are close together from Earth's perspective, can you tell those two objects apart? In the great expanse of space, even objects that are very far apart from one another, like a sun and its planets, can be hard to resolve.

In fact, when seen from Earth with the naked eye, the two stars of the Alpha Centauri system are faint and often appear as one star in the sky. Any telescope could show you that these are indeed separate stars, but to make out orbiting planets, a far more challenging task, we need to have an image with much, much higher resolution.

So what's the challenge here? For a ground-based telescope, it's the turbulence in the Earth's atmosphere. This is the same reason that stars twinkle. In space, stars appear as simple points of light; they're so far away that even the biggest ones are nothing more than a point. But as their light passes through the Earth's atmosphere, that light becomes distorted. By the time it gets to your eye — or to a telescope — it's basically a twinkling blob. It's impossible to make out an orbiting planet unless you correct for the degradation.

That's where adaptive optics comes in. We use something called a deformable mirror. It's a mirror that we bend to correct the turbulence. This allows us to see the image more or less as you would in space. Our goal in adaptive optics is to obtain the sharpest possible images, for the largest possible telescopes. Because of atmospheric turbulence, a 10-centimeter (4 inches) backyard telescope has the same resolution as the 10-meter (33 feet) Keck telescope in Hawaii (one of the world's largest optical telescopes). But with adaptive optics, the larger, more powerful telescopes are much better at resolving distant objects. [10 Biggest Telescopes on Earth: How They Measure Up]

So what about telescopes in space? There, the problem is subtler. You don't have the issue of distortion from the atmosphere, and this means you can see objects more clearly. This is crucial if you're trying to resolve a very faint, small, rocky planet in the habitable zone of a bright star, like the Alpha Centauri imaging initiative Project Blue is doing.

But when the prize is this small, even miniscule imperfections in the telescope mirror and lenses can degrade the image. As the telescope circles the Earth, it will be warmed by the sun and cooled again by the Earth's shadow. This will cause the telescope's parts to expand and contract ever so slightly — again, causing small changes to the optics that could prevent observers from making out the tiny faint glimmer of a planet.

I'm currently working with the Magellan Telescope in Chile, trying to determine if close stars like Alpha Centauri A and B have gas giants in close orbits. If a planet is close enough to the star — within the habitable zone, where liquid water could exist on the surface — such a gas giant would be fairly warm. We can see the heat from large, warm planets in infrared light.

But here's the thing: Gas giants are so big that their gravity clears rocky planets out of the way, sort of like a giant cosmic leaf blower. This means that if there are gas giants orbiting close to Alpha Centauri A or B, they would have cleared any Earth-like planets out of the system eons ago.

For that reason, I'm hoping we come up empty. If we can show that there are no gas giants in the habitable zone, it means that another Earth could be lurking there instead.

Jared Males is an assistant astronomer at the University of Arizona's Steward Observatory and a member of Project Blue's Science and Technology Advisory Committee. Follow us @Spacedotcom, Facebook and Google+. Original article on Space.com.