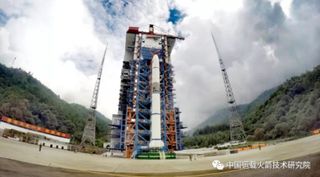 HELSINKI — The launch of a Long March 2C from Xichang last week included a first use of grid fins by China to minimize the threat posed by the spent first stage to populated areas downrange.

The two-stage hypergolic Long March 2C lifted off at 11:57 p.m. Eastern July 25 carrying three Yaogan-30 (group 5) satellites into a roughly 600 kilometer orbit inclined by 35 degrees. With few details available, outside observers state that the satellites are likely for reconnaissance use by the People’s Liberation Army.

Gaining more attention was the fact that the interstage section of the launch vehicle, colored gray above and attached to the first stage, included four grid fins with apparent resemblance to those used to guide SpaceX Falcon 9 and Falcon Heavy boosters back to landing areas.

The China Aerospace Science and Technology Corporation (CASC), the main contractor for China's space programs, stated in a post-launch statement that the stage fell within the designated zone in prefectures within Guizhou province. Footage of first stage falling to Earth in a densely vegetated area was also released on social media.

The test comes in apparent response to increased awareness and visibility of spent boosters falling downrange near populated areas and increased launch activity. Three of China’s four national launch centers were established during the Cold War, with tensions with the United States and Soviet Union prompting the decision for the sites to be located far inland for security reasons. Despite careful rocket flight path design and safety measures on the ground, spent boosters have frequently fallen among towns and villages downrange from Xichang, sometimes damaging property.

Yikes. And footage of the Long March 2C coming back to Earth. https://t.co/mrhkOpAIWU pic.twitter.com/gFEs8WgsfFJuly 26, 2019

According to CASC, a team of one dozen members with an average age of under 35 carried out the research and development of the grid fins, which needed to be able to unlock, extend and rotate while also resisting high temperatures and pressures.

CASC stated that the grid fins successfully helped ease safety concerns by allowing a hard landing within a smaller drop zone, reducing both the need for evacuation of populated areas and hence inconvenience to locals and launch costs.

Additionally CASC states that the breakthrough is of major significance to Chinese aerospace and is a step toward controlled descent and landings which could lead to reuse of rocket stages.

The China Academy of Launch Vehicle Technology (CALT) and the Shanghai Academy of Space Technology (SAST), two rocket design and manufacturer groups belonging to CASC, are developing launch vehicles capable of vertical takeoff and vertical landing, including the new Long March 8 and a variant of the Long March 6, both using kerosene and liquid oxygen.

A Chinese language article published by China Youth Daily has obliquely referred to a delay to the third flight of the Long March 5, China’s only heavy-lift rocket and a requirement for major planned missions. As SpaceNews reported in June, preparations for a stated return to flight late July had not taken place, indicating a slip in the schedule.

The July 26 article states that a redesign of the turbopump for the YF-77 liquid hydrogen-liquid oxygen propellant engines has taken place, adding five guide vanes to the exhaust structure. The YF-77 was isolated as the point of failure at 346 seconds into the second flight of the Long March 5 in July 2017.

The "substantial" redesign has led to the scrapping of existing inventories. The production of the new components, using nickel superalloys instead of stainless steel used previously, is imminent, according to the article.

Transfer of rocket components from the northern port city of Tianjin to the southern island of Hainan and subsequent launch preparations at Wenchang Satellite Launch Center have previously taken two-and-a-half months, meaning a return to flight of the Long March 5 no earlier than late 2019. This may result in a compression of the launch schedule or a prioritizing of missions.

Based on a successful return to flight in July, the fourth Long March 5 was slated to launch the Chang'e-5 lunar sample return mission at the end of 2019. A test launch of the Long March 5B, the launcher designed for the construction of the future Chinese Space Station, would then follow, before the fifth Long March 5 launches the country’s first independent mission to Mars during a once-every-26-month launch window in late July to early August 2020.