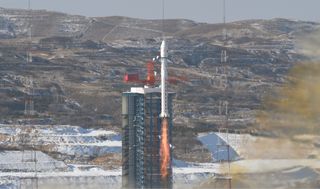 Footage released by Chinese state news outlet CCTV shows the exhaust patterns created by hydrazine and nitrogen tetroxide propellant as the Long March 2D lifts off. Moments later, insulation tiles are seen falling away as the rocket climbs into the sky.

The mission is China's second of the year so far, following the launch of a mystery payload on Jan. 7. It is the third launch globally as SpaceX kicked off the year by sending 60 Starlink satellites into orbit on Jan. 6.

The largest satellite on Wednesday's launch was the Jilin-1 (Wideband-1) Earth observation satellite. The satellite is part of a planned constellation of imaging satellites being developed by Chang Guang Satellite Technology Co., Ltd., a commercial spinoff from the Chinese Academy of Sciences. The satellite, also known as Red Flag-1 H9, will provide super wide coverage with resolution better than 1 meter.

Also aboard were two imaging satellites for Satellogic, an Argentina-based company with its own plans to build a commercial low Earth orbit Earth observation constellation. ÑuSat 7 and 8 are also known as Sophie and Marie, named for French mathematician Sophie Germain and physicist Marie Curie.

Major missions include sending an orbiter and rover to Mars in late July or early August, and the Chang’e-5 lunar sample return mission late in the year. Both missions will use the huge Long March 5 which recently returned to flight.

Also expected is a test launch of a rocket designed to lift China's space station modules into low Earth orbit. This test will carry an uncrewed next-generation spacecraft for human spaceflight.