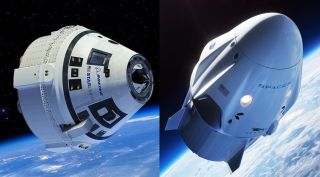 From commercial crew to a flood of Mars missions, 2020 promises to be an exciting year for spaceflight. Companies and space agencies alike have a series of interesting missions on deck for the year, from returning lunar samples to studying the sun up close.

Be sure to check out the list of highlights below, and to go for our 2020 launch calendar for more details on exact dates and times for each mission as the launch date approaches.

SpaceX and Boeing to fly astronauts

This could finally be the year when NASA's astronauts fly to space in commercial crew vehicles.

SpaceX's Crew Dragon and Boeing's Starliner are expected to bring the first astronauts to space in the coming year, although exact launch dates haven't been announced yet. Both spacecraft are still in testing mode to make them as safe as possible for humans.

Starliner had a major milestone in December when it launched an uncrewed test flight, although the spacecraft did not reach the ISS due to burning too much fuel during launch. SpaceX flew a successful uncrewed Crew Dragon flight to the station in March 2018, and is also preparing for an in-flight abort test in January. That SpaceX In-Flight Abort test will launch no earlier than Jan. 11.

The Commercial Crew program recently came under criticism from NASA's Office of the Inspector General for ongoing delays.

The Solar Orbiter – a joint mission of NASA and the European Space Agency – is scheduled to lift off from Cape Canaveral Air Force Station in Florida on Feb. 5.

Mars 2020 and 3 others launching in July

With Mars coming close in its orbit to Earth in 2020, July is a prime launching time for an incredible four missions to the Red Planet.

On July 17, NASA will launch its long-awaited Mars 2020 rover to explore possible sites of ancient habitability, while the European Space Agency and Russia plan to do the same with their ExoMars Rosalind Franklin rover on July 25.

The United Arab Emirates plans its first mission, the Hope Mars Mission, which will launch from Japan. China also plans a lander and a small rover for Mars.

The first launch of the Small Satellite Launch Vehicle, a new rocket from the Indian Space Research Organisation, is expected sometime in early 2020. (Spaceflight Now has the mission pegged for January.)

The goal is to create a small launcher that can launch frequently and with few people, to save on operations cost and complications. In 2020, it will launch its first commercial mission with four Earth observation satellites for BlackSky Global.

All SSLVs will lift off from the Satish Dhawan Space Center in Sriharikota, India.

SpaceX plans to kick off 2020 with another batch of its Starlink satellites, which are meant to provide global connectivity in broadband. Starlink may eventually comprise as many as 42,000 individual vehicles circling the Earth.

SpaceX has said the vehicles are equipped with sensors to dodge collisions, but observers still worry about orbital debris. The company is also planning to coat the satellites in anti-reflective stuff to ease worries about this large constellation interfering with astronomical observations.

In addition to Starlink and Crew Dragon, SpaceX has a two other ongoing rocket programs. The company's heavy-lift Falcon Heavy, the most powerful rocket in use today, may launch a mission for the U.S. Air Force in late 2020, according to Spaceflight Now.

SpaceX is also expected to continue development work on its Starship Mk 3 prototype for deep-space missions.

China's space agency is expected to launch its next moon mission, called Chang'e-5, sometime in 2020.

The country wants to send a sample of the moon back to Earth for analysis, following on to its highly successful Chang'e-4 mission that put a lander and a rover safely on the far side of the moon. Its landing site is Mons Rümker, a mountain nearby a large basaltic lunar area called Oceanus Procellarum. If Chang'e-5 succeeds, it will be the first mission to bring back samples of the moon since the last Apollo mission of 1972.

Related: China On the Moon! A History of Chinese Lunar Missions in Pictures

The U.S. Air Force is expected to, sometime in 2020, once again launch the mysterious X-37B space plane (also known as the Orbital Test Vehicle).

This will be the sixth mission of the uncrewed vehicle, which can stay in space for up to a year at a time to perform its secret work. In 2019, one of Air Force's two known X-37 spacecraft returned to Earth after a record-breaking 780-day spaceflight. That's more than two years in space.

The Air Force usually discusses only the overall goals of the program, because it classifies each payload: "Reusable spacecraft technologies for America's future in space and operating experiments which can be returned to, and examined, on Earth," states an X-37B fact sheet produced by the Air Force.

In 2019, Virgin Galactic launched its first test passenger into space. In 2020, the company is expected to begin launching space tourist flights with paying passengers aboard.

Those flights, potentially slated for mid-year, will launch passengers from Spaceport America in New Mexico, the home of Virgin Galactic's SpaceShipTwo fleet and its carrier aircraft WhiteKnightTwo. Virgin Galactic is offering suborbital spaceflights for passengers at $250,000 per ticket.

Virgin Galactic currently has one SpaceShipTwo, the VSS Unity, and a single carrier plane the VMS Eve. The company is building a second spacecraft now. SpaceShipTwo vehicles can carry up to eight people, two pilots and six passengers.

Blue Origin, the private space company founded by Amazon billionaire Jeff Bezos, launched three flights of its New Shepard spacecraft in 2019 - most recently on Dec. 11 - and is on track to make the leap into human spaceflight in 2020.

The New Shepard spacecraft consists of a reusable booster and crew capsule designed to fly up to six people, or the equivalent weight in experiments, to suborbital space at a time. The booster launches and lands vertically, with the capsule returning to a land-based landing under parachutes.

To date, Blue Origin has flown 12 New Shepard missions, with the last six flying on the same booster and capsule. Ariane Cornell, director of Blue Origin's astronaut and orbital sales, has said the company needs a "couple of more" flights to be ready for crewed missions.

While Blue Origin has said it will fly passengers on suborbital trips, it has not stated how much a seat will cost.

Virgin Galactic isn't the only company expecting to make a space leap in 2020. Its sister company Virgin Orbit aims to begin orbital launches during the year.

Virgin Orbit is a small-satellite launch company that aims to launch payloads into orbit using LauncherOne. The rocket is an air-launched booster carried into launch position by a modified Boeing 747 jumbo jet called Cosmic Girl.

In July 2019, Virgin Orbit successfully performed a drop test of its LauncherOne rocket after a series of captive carry shakedown tests. The first launch from Virgin Orbit is expected to take off from California's Mojave Air and Space Port and launch from a position over the Pacific Ocean.

Virgin Orbit isn't the only small-satellite companies making a launch debut in 2020. So, too, is Firefly Aerospace.

The Texas-based company is developing the Alpha rocket to launch payloads of up to 2,220 lbs. (1,000 kilograms) to low Earth orbit. The rocket stands 95 feet tall (29 meters) and will launch from a Firefly pad at Vandenberg Air Force Base in California.

Firefly plans to launch the rocket's first test flight in April 2020, with a second flight to follow by June if all goes according to plan.