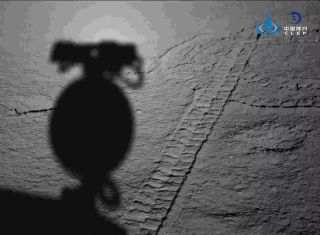 It's back to work for China's moon mission: The Chang'e 4 lander and the Yutu 2 rover both awoke over the weekend to start their fourth lunar day.

Both robots went to sleep on March 13 to wait out the long, frigid lunar night, which lasts for about two Earth weeks. That dormancy marked the third night for the mission, which touched down on the moon's surface on Jan. 2.

As of the end of its third lunar day, Yutu 2 had traveled a total of 535 feet (163 meters) on the moon's surface around Von Kármán Crater on the far side.

Related: Chang'e 4 in Pictures: China on the Moon's Far Side

The rover was designed to last for three lunar days, but much like NASA missions that regularly outlive their initial mandates, Yutu 2's mission may stretch on longer, the Chinese space agency hopes. (The current rover's predecessor, Yutu, lost its roving ability on its second day on the moon.)

The China Lunar Exploration Program, which heads up the mission, has not provided any details about its scientific plans for the fourth day of Chang'e 4, which is focused on exploring the far side of the moon and how it differs from the near side.