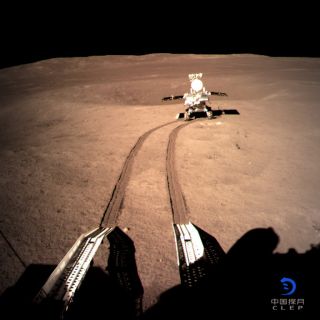 China's far-side moon rover Yutu 2 has woken up from its nap as planned, according to Chinese media reports.

"China's space engineers care about the reactivation, as the last model [Yutu 1] failed its first awakening in February 2014," China's Global Television Network (CGTN) reported today (Jan. 10). Yutu 1 was the rover on China's Chang'e 3 moon mission, which landed on the near side in December 2013.

On Jan. 2, the Chang'e 4 mission pulled off the first-ever soft landing on the moon's far side. The rover-lander duo touched down on the floor of the 110-mile-wide (186 kilometers) Von Kármán Crater, which lies within the South Pole-Aitken Basin, the largest and deepest basin in the solar system. [China's Chang'e 4 Farside Moon Landing in Pictures]

Yutu 2's handlers powered the rover down a few days later, in a "noon nap" designed to protect against temporarily high lunar temperatures.

Meanwhile, a suite of international payloads carried by Chang'e 4 have started operations.

A neutron radiation detector aboard the lander, developed by Germany, and a neutral atom detector on the rover, developed by Sweden, have both been switched on, according to a statement by the China National Space Administration (CNSA). Both detectors have been booted up and are under testing.

The Swedish device, the Advanced Small Analyzer for Neutrals (ASAN), will study how the solar wind interacts with the lunar surface. ASAN, which was built in collaboration with the Chinese National Space Science Center (NSSC), is the first energetic neutral atom sensor ever deployed on the lunar surface. From a vantage point of only a few decimeters above the regolith surface, ASAN will measure energy spectra of energetic neutral atoms originating from reflected solar wind ions under different solar wind illumination conditions.

"Yes, we have successfully started commissioning of ASAN and expect the first science data before mid-February," ASAN principal investigator Martin Wieser, a researcher at the Swedish Institute of Space Physics, told Inside Outer Space. "It depends on the rover being in a favorable position."

ASAN is mounted on the Yutu 2 rover, allowing the instrument to perform measurements at different locations. These data could shed light on the processes responsible for the formation of water on the moon, researchers have said.

Chang'e 4's data comes to Earth via the relay satellite Queqiao (Magpie Bridge). Queqiao launched in May 2018 to set up the communication link with the moon's far side, which always points away from our planet. [China's Moon Missions Explained (Infographic)]

"The terrain at the far side of the moon is entirely different compared to the near side. There are more highlands, craters, and mountains and the landform is much steeper," Yang told China's state-run Xinhua news agency. (A summary of the geology of the Chang'e 4 landing region can be found in this recent paper.)

Yang also highlighted the importance of a new low-frequency spectrometer carried on the Chang'e 4 mission that will conduct a radio-astronomical study from the far side, an ideal place to conduct such work as there is no radio disturbance from Earth.

LRO is slated to fly over the landing area in the coming weeks and may spot the Chang'e 4 hardware on the surface. LRO will be able to scout for the Chang'e 4 lander and Yutu 2 rover at about midnight on Jan. 31, Mark Robinson told Inside Outer Space. Robinson, of Arizona State University, is principal investigator for LRO's LROC camera system.

An Argentina-based ground station built by China has played an important role in the monitoring and control of the mission. Furthermore, ground stations run by the European Space Agency will also offer support, according to Xinhua reports.

The Chang'e 4 mission also includes a radioisotope heat source, a collaboration between Chinese and Russian scientists, to help deal with the huge temperature swings on the surface of the moon. (One lunar day lasts nearly 30 Earth days, so spacecraft on the moon experience two weeks of perpetual darkness followed by two weeks of sunlight.)

Leonard David is author of the forthcoming book, "Moon Rush: The New Space Race" to be published by National Geographic in May 2019. A longtime writer for SPACE.com, David has been reporting on the space industry for more than five decades. Follow us @Spacedotcom or Facebook. This version of the story published on Space.com.