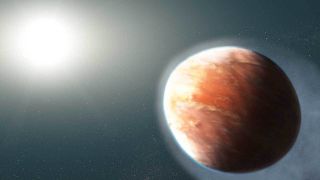 An exoplanet may be shaped like an American football due to the mighty gravitational forces it experiences close to its star, a new study finds.

Scientists investigated KOI 1843.03, an exoplanet candidate that scientists need further observations to say for sure is real. This world putatively orbits a red dwarf star with slightly less than half the mass of our sun and is located about 395 light-years from Earth. Previous research found KOI 1843.03 was about 44% Earth's mass and 60% Earth's diameter.

Prior work suggested KOI 1843.03 orbited its star more closely than any other planet known yet. "Whizzing around its star in only 4.245 hours, a 'year' for this planet is just over one-sixth of a day on Earth," Leslie Rogers, an astrophysicist at the University of Chicago and the senior author of the new research, told Space.com.

In previous work focused on KOI 1843.03, Rogers and her colleagues analyzed potential consequences of the powerful gravitational forces the planet likely experiences from its close-in orbit. (Those forces are  essentially an extraordinarily strong version of the tidal forces Earth experiences from the moon.) In that work, the scientists suggested that the exoplanet must be made primarily of iron to avoid getting ripped apart. Whereas Earth is about 32% iron, they estimated KOI 1843.03 was likely 66% iron.

"KOI 1843.03 is one of the most iron-enhanced exoplanets discovered to date," Rogers said.

Scientists had known of a handful of iron-rich "cannonball" planets, rather like Mercury in our own solar system, which is about 70% iron. To see what effects an extreme orbit like that of KOI 1843.03 might have on such a world, the researchers carried out the first 3D simulations of the interior structures of rocky planets whose ultra-tiny orbits would generate tidal distortions.

The researchers noted that of the nine exoplanets whose orbits are less than one day long for which researchers have good density estimates, four appear rich in iron. But such planets could actually be more spherical than iron-poor worlds in the same orbits. "We expect that more iron-rich compositions will lead to less distorted planets," Ellen Price, an astrophysicist at the Harvard-Smithsonian Center for Astrophysics in Massachusetts and the lead author on the new research, told Space.com. "There is a trade-off between how extreme the shape of the planet is and how extreme its composition is."

In the future, the researchers would like to model how such tidally distorted rocky exoplanets might look as they pass in front of their stars, and whether they could detect if an exoplanet was distorted based on its shadow.

"Essentially, the area of the shadow cast by a football-shaped planet depends on your viewing angle," Price said. "So as the planet orbits its star with its long axis continually pointed toward its star, the amount of light blocked by the planet changes differently with time as compared to the amount of light that would be blocked if the planet were spherical."

The scientists detailed their findings online Jan. 30 in a study accepted by the Astrophysical Journal.