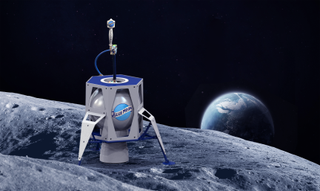 Blue Moon (the lander) is a robotic craft with a large fuel tank in the middle. Its sides and landing legs make it look a little like the Apollo lunar module that brought astronauts to the moon in the 1960s and 1970s. The kegs will look much like that, Hitch said, but with the brewing company's logo in place of the one from Blue Origin — and with more hints of blue. Inside the kegs will be the company's signature Belgian White beer. The kegs were designed by Darin McKnight, a packaging and materials development engineer at Blue Moon's parent company, MillerCoors.

The moon-landing anniversary is a perfect moment to capitalize on Blue Moon Brewing Co.'s core audience of 21- to 34-year-olds who will want to celebrate the moon landing anniversary even though it was their parents and grandparents who were alive to see it, Hitch said. "We are constantly exploring ways to honor these missions and these great achievements," she added, and those tributes include an Apollo 11 TV spot that released this week. More campaigns will be unveiled in the next few months.