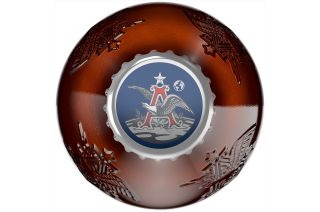 Budweiser Discovery Reserve bottle caps represent humanity's footsteps on both the moon and the next frontier, Mars.
(Image: © Budweiser)

Budweiser has brewed a new limited edition beer in celebration of the 50th anniversary of the first moon landing.

Discovery Reserve American Red Lager draws its recipe from a Budweiser blend that dates back to the time of the Apollo moon missions.

"This Bud's for those who challenged the odds and made the impossible, possible. Budweiser Discovery Reserve is our tribute to this epic moment in history, one that will certainly continue to inspire generations of present and future explorers," said Ricardo Marques, vice president of marketing core and value brands at Anheuser-Busch, in a statement released on Tuesday (April 16).

Discovery Reserve is brewed with medium-roast Voyager barley malt and features a "light hoppy aroma, a toasted barley malt taste with a hint of toffee and a sharp finish," says Budweiser. The lager's reddish color is meant to be reminiscent of the next frontier for humans, Mars.

The Discovery Reserve bottle and packaging was inspired by both the history and future of space exploration.

The 11 stars on the label represent the Apollo 11 mission, which landed astronauts Neil Armstrong and Buzz Aldrin on the moon's Sea of Tranquility on July 20, 1969. Alternating bottle caps represent the historic boot prints on the moon and the ones that are still to come on the Red Planet.

The Anheuser-Busch "A" and Eagle logo has also been updated to reflect Mars with Earth in the background, evoking the design of the Apollo 11 mission patch. And each bottle of Budweiser Discovery Reserve features wings and stars based on vintage Budweiser cans.

Discovery Reserve will be available through September, or while supplies last. The company will be promoting the limited edition lager through in-store displays, digital advertising and social marketing programming, as well as a new television commercial that starts airing this week.

For every case of Discovery Reserve sold, Budweiser will donate $1 to the Folds of Honor Foundation, a non-profit organization that provides educational scholarships to the families of military men and women who have fallen or been disabled while on active duty in the United States armed forces. The donation, which Budweiser says is a nod to the U.S. Air Force's partnership with the space program, continues the company's support of the foundation for an eighth year.

"We are proud to stand with them as they release Discovery Reserve, further illustrating their commitment to our armed forces," said Maj. Dan Rooney, founder and CEO of Folds of Honor.

In addition to creating a lager for the Apollo 11 50th anniversary, Budweiser has been working towards the formulation of a beer for the future explorers of Mars. Announced in 2017, the "Bud on Mars" campaign has since sent three payloads to the International Space Station to experiment with germinating and malting in microgravity.

Click through to collectSPACE to watch the commercial for Budweiser Discovery Reserve.