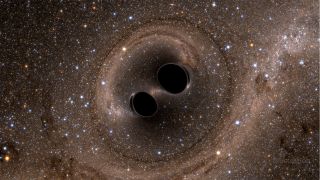 Have you ever wondered what would happen if Earth got gobbled up by a black hole (apart from everybody dying, of course)? Now you can find out, thanks to the online Black Hole Collision Calculator.

And if the black hole harbored 4 million times the mass of the sun, ingesting our poor beleaguered Earth would swell the behemoth's event horizon — the point of no return beyond which nothing, not even light, can escape — by a mere 0.00000000007281%.

That black hole would be of the supermassive variety, similar in heft to Sagittarius A*, the monster that lurks at the heart of our Milky Way galaxy. But what if we had a run-in with a much smaller black hole — say, one harboring just 20 solar masses? Well, then we'd make more of a dent, causing 0.000014562% event-horizon growth.

And Earth doesn't have to be involved in the modeled smashup; the calculator lets you choose the mass of both bodies. For example, a collision involving black holes that each contain about 30 solar masses — one akin to some of the mergers detected by the Laser Interferometer Gravitational-Wave Observatory Collaboration — would yield a single black hole of 59 solar masses. And this new object's event horizon would be 108.5 miles (174.6 kilometers) wide, 97% larger than those of the merging parties.

The collision calculator, part of the Omni Calculator Project, was built by Álvaro Diez, a physics student at the University of Warsaw in Poland. It took about a week of work to get the calculator up and running, and the majority of that time was spent making the tool appealing and understandable to a broad audience, Diez said.

"The physics underneath are not extremely complicated (surprisingly enough, you can use Newtonian mechanics to describe general features of black holes with high precision), but are definitely weird," Diez told Space.com via email.

Diez has built other calculators as well. "For as long as I've known anything about science, I loved sharing that knowledge and helping people learn about the wonders of our universe," he said.

He added that he was motivated to construct the collision calculator by the recent run of big black-hole news. Earlier this year, for example, scientists with the Event Horizon Telescope project released the first-ever direct image of a black hole's shadow.

And just last month, one team of astronomers announced the detection of a star being ripped to shreds by a black hole, and another team discovered three supermassive black holes that are on a collision course.

"So, I could not contain myself anymore and decided to be part of this 'Year of the Black Hole' of sorts by creating a calculator that would help people understand better these mysterious objects," Diez said.

You can find the collision calculator here: https://www.omnicalculator.com/physics/black-hole.