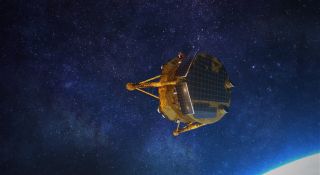 An artist's illustration of the Beresheet moon lander built by SpaceIL and Israel Aerospace Industries in space. The lander entered orbit around the moon on April 4, 2019.
(Image: © SpaceIL)

The Israeli organization SpaceIL will not be performing a lunar return for its second Beresheet mission after all, according to a recent tweet.

"This time, we will not go to the moon," began the message that SpaceIL published on Tuesday (June 25). "Beresheet's journey to the Moon was already received as a successful, record-breaking journey. Instead we will seek out another, significant objective for Beresheet 2.0. More details to follow…"

Related: Israeli Lunar Lander Snaps Amazing Photos of the Far Side of the Moon

The Beresheet mission launched in February 2019 and successfully completed a six-week journey to the moon. On April 4, Beresheet was captured by the moon's gravity and entered into a lunar orbit.

This time, we will not go to the moon. Beresheet's journey to the Moon was already received as a successful, record-breaking journey. Instead we will seek out another, significant objective for Beresheet 2.0. More details to follow... pic.twitter.com/W8absyxT1YJune 25, 2019

Shortly following the crash, SpaceIL president Morris Kahn announced there would be a Beresheet 2.0. "We're going to actually build a new halalit — a new spacecraft," Kahn said in a video statement posted by SpaceIL to Twitter on April 13, two days after the crash. "We're going to put it on the moon, and we're going to complete the mission." (Kahn funded a large portion of the mission; the billionaire businessman covered roughly 40% of the project's total $100 million cost.)

Plans appear to have changed since April. The cryptic June 25 tweet offered little else other than an image of the words, "Dare To Dream," and some replies to comments in the tweet's thread.

"While the landing was clearly disappointing, getting to the Moon, in itself, was a huge achievement," SpaceIL wrote early Wednesday (June 26) in a comment-reply.

SpaceIL built and operated Beresheet along with the government-owned Israel Aerospace Industries. Beresheet launched into space atop a used SpaceX Falcon 9 rocket that took off from Cape Canaveral, Florida, on Feb. 21, 2019.