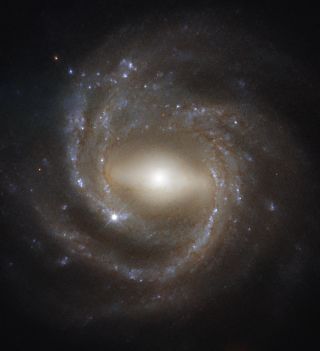 A beautiful new Hubble Space Telescope image of a barred spiral galaxy shows a scene similar to what outside observers might see when they look at our own Milky Way.

The image of NGC 7773 shows a prominent bar of stars slashing right through the heart of the galaxy, moving from the star-studded spiral arms on one side of the galaxy to the other. Astronomers are studying this object to better learn about changes in our own Milky Way home.

"Astronomers think that these bar structures emerge later in the lifetime of a galaxy, as star-forming material makes its way towards the galactic center," officials from NASA's Goddard Space Flight Center said in a statement.

"Younger spirals do not feature barred structures as often as older spirals do, suggesting that bars are a sign of galactic maturity. They are also thought to act as stellar nurseries, as they gleam brightly with copious numbers of youthful stars."

While astronomers say studies of NGC 7773 and similar barred spirals help them understand the processes that change our own Milky Way, each galaxy has its unique history. Our galaxy has been shaped by many forces of evolution, including possible galactic mergers. In fact, the Milky Way and the Andromeda galaxy (M31) are on course for an epic collision course in a few billion years.

Hubble obtained the image using its Wide Field Camera 3, which space shuttle astronauts installed on the telescope in 2009. Hubble and its instruments remain in good health and are expected to continue performing observations beyond the 2021 launch of its successor, the James Webb Space Telescope.