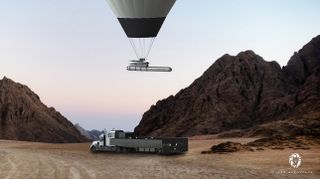 California-based startup Leo Aerospace is developing a small-satellite launch system employing a rocket and a big hot-air balloon. The system will be mobile, capable of launching off the back of a semitruck.
(Image: © Leo Aerospace)

Los Angeles-based startup Leo Aerospace is developing a system that will loft bantam spacecraft using a rocket dropped from a giant hot-air balloon about 60,000 feet (18,000 meters) above Earth's surface.

Such "rockoons" had something of a heyday in the 1950s, when they were employed on dozens of suborbital atmospheric-research flights. But they haven't made much spaceflight noise since. (Today's prominent air-launch vehicles, such as Northrop Grumman's Pegasus rocket and Virgin Galactic's SpaceShipTwo spaceliner, are carried aloft by planes.)

Leo Aerospace's autonomous aerostat, named Regulus, is far more advanced than the simple helium balloons of 60 years ago. The autonomous Regulus features multiple thrusters to maintain stability and orientation, for example, as well as a proprietary rail system for the three-stage, 33-foot-long (10 m) rocket.

Those rockets will be expendable, but Regulus is designed for rapid and extensive reuse. Indeed, each individual balloon will be able to fly 100 missions, Leo Aerospace co-founder Bryce Prior said earlier this month during a presentation at the U.S. Air Force's first-ever Space Pitch Day.

And the system is mobile, essentially employing a semitruck as a launchpad.

"We can launch from anywhere that you can fit a cargo container," said Prior, who also serves as Leo Aerospace's head of operations and strategy.

Prior did not disclose exactly how much the company plans to charge for an orbital launch. But he did say the cost will likely be just one to three times what customers currently pay for "ride-share" access on big rockets like SpaceX's Falcon 9.

Ride-share participants don't have total control over where their satellites are deployed; as hitchhikers, they must make do with the mission profile required by the primary payload. Leo Aerospace will offer small-satellite operators that control with a dedicated launch, Prior said.

This business plan is similar to that of Rocket Lab, a pioneer in dedicated small-satellite launches. But Leo Aerospace aims to carve out a niche by focusing on even tinier spacecraft; Rocket Lab's 57-foot-tall (17 m) Electron booster can loft about 500 lbs. (225 kg) to orbit on each roughly $5 million liftoff.

Leo Aerospace has some competition for this slice of the spaceflight pie. Spanish startup Zero 2 Infinity has similar goals, for example, and is also developing a rockoon system, which performed its first rocket-powered test flight in 2017.

Regulus will come online as a high-altitude platform by the middle of next year, if all goes according to plan, Prior said. This system will have utility in its own right, even without a rocket on board. For example, Regulus could help engineers test technology for Mars entry, descent and landing. (The air thins out considerably high above Earth, providing a decent analogue of the Red Planet's atmosphere.)

Leo Aerospace aims to start providing suborbital launches in 2021 and orbital missions by the end of the following year, Prior added.

Editor's note: This story originally stated that Leo Aerospace received $750,000 earlier this month at the U.S. Air Force's first Space Pitch Day event. That is not correct; the company presented at Space Pitch Day but did not make a "closed-door pitch" for on-the-spot funding. Leo Aerospace is instead applying for government funding as part of the normal Small Business Innovation Research (SBIR) Phase II process and expects to hear back about a potential award soon.