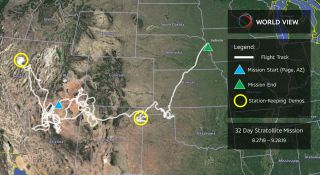 This diagram shows the flight path of World View's Stratollite high-altitude balloon system during its most recent test flight, which took place from Aug. 27 to Sept. 28, 2019.
(Image: © World View Enterprises)

A high-altitude balloon system continues to float toward commercial flight.

"This is another encouraging milestone for the team and our customers that confirms we are on the right track,” World View President and CEO Ryan Hartman said in a statement. "It sets the stage for a challenging set of missions ahead of us as we continue to push the envelope and demonstrate the ability of the Stratollite to meet customer requirements."

Related: World View Wants to Open a New Market at the Edge of Space

Stratollite is a portmanteau of "stratosphere" and "satellite." The name lays out the balloon's envisioned role — giving customers long-term bird's-eye views of large patches of ground.

Stratollite can host a variety of payloads and is operated under full navigational control, so its potential uses are many, World View representatives have said. For example, the system could help track severe weather and monitor natural disasters, and could also aid military reconnaissance missions.

The latest test mission began on Aug. 27 with a liftoff from the northern Arizona town of Page, and ended on Sept. 28 with a touchdown in Iowa. The Stratollite flew 6,960 miles (11,200 kilometers) during its month-long jaunt, crossing the borders of 10 states (Arizona, Utah, Nevada, Colorado, New Mexico, Texas, Oklahoma, Nebraska, Iowa and Kansas).

Mission-team members at World View headquarters in Tucson, Arizona, maintained control of the Stratollite the entire time, company representatives said. The balloon successfully completed two "station-keeping" exercises as well: It managed to stay within 12 miles (20 km), on average, of one target for four straight days, and within 25 miles (40 km) of a second target for 2.5 consecutive days, World View representatives said.

This same balloon will be refurbished for another flight, which may occur soon.

"The company plans to launch multiple missions in the very near future, focused on demonstrating optical imaging and synthetic-aperture, radar-sensing systems with further enhancement of station-keeping and navigational performance," World View representatives said in the same statement.

World View is also developing a crewed balloon system called Voyager, which is designed to give customers long looks at Earth from 100,000 feet (30,500 meters) up — about three times higher than commercial airliners fly.