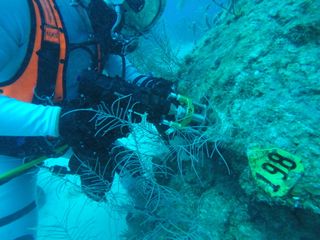 An astronaut-led crew will go underwater to get ready for human moon missions. The 10-day NASA Extreme Environment Mission Operations (NEEMO) 23 expedition is scheduled to begin June 10 and will test technologies NASA will use for lunar missions that could come as soon as 2024.

Among the crew goals is testing science instruments and tools for work on the moon, including items that will help get "core samples" — a cylindrical cross-section of the moon's geology just below the surface — NASA officials said in a statement. Apollo astronauts who did lunar missions (between 1969 and 1972) obtained several core samples using a special device called the Apollo Lunar Surface Drill.

The mission also includes work that is useful for a variety of deep-space destinations, including tracking sleep and using augmented reality to train crewmembers in navigating their habitat. Astronauts will live and work in the Aquarius laboratory, which is located 62 feet (19 meters) below the ocean surface near Key Largo, Florida. They will also venture outside the habitat to explore the nearby underwater environment.

"The close parallels of inner and outer space exploration will be clearly demonstrated during this undersea mission," Bill Todd, NEEMO project lead, said in the NASA statement. "The daily seafloor traverses, or 'extravehicular activities' in space jargon, are jam-packed with technology and operations concept testing, as well as complex marine science. In the interior of Aquarius, aquanauts and astronauts will tackle an array of experiments and human research related to long duration space travel."

Leading the crew will be Samantha Cristoforetti, a European Space Agency astronaut who spent 200 days in space during Expeditions 42 and 43, between 2014 and 2015. She holds the record for longest spaceflight by a European.

Joining her will be Jessica Watkins, a NASA astronaut candidate; Shirley Pomponi, a research professor at Harbor Branch Oceanographic Institute-Florida Atlantic University and professor of marine biotechnology at Wageningen University & Research, Netherlands; and Csilla D'Agostino, whose many affiliations include research assistant professor from the University of South Florida and CEO of the company Ketone Technologies. Accompanying the crew in the habitat will be two professional habitat technicians, who NASA did not name in the press release.

Earlier this year, the Trump administration set a goal for NASA to return humans to the surface of the moon by 2024; the administration requested an additional $1.6 billion in NASA's fiscal 2020 budget for this effort. The announcement came in the 50th anniversary year of the first moon landing in 1969.