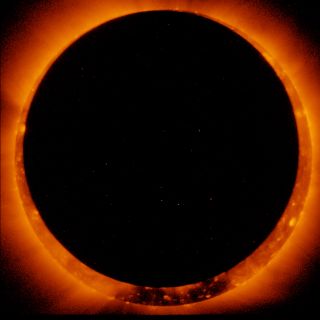 A spacecraft's view of an annular solar eclipse in 2012.
(Image: © Hinode/XRT)

If you're planning to spend Christmas in the Eastern Hemisphere, you'll have a celestial treat to look forward to the next day as the new moon eclipses the sun in an annular event, or "ring of fire" solar eclipse, on Wednesday (Dec. 26).

This will be the final eclipse of 2019 and unfortunately, North America will not see any part of it. Only skywatchers in parts of Europe, Asia, Australia and Africa will be able to catch a glimpse of the display. (Warning: Be sure to track down proper eye protection if you live in these areas! It is dangerous to view the sun directly during all stages of this eclipse.)

You can watch the "ring of fire" solar eclipse online, courtesy of Slooh.com, beginning at 10 p.m. EST on Dec. 24 (0300 Dec. 26 GMT). The webcast will be available directly from Slooh.com here, and on the Space.com homepage.

Related: Amazing Solar Eclipse Pictures from Around the World

Although the new moon will pass directly across the face of the sun, it will not cover the sun's face entirely. That's because the moon is currently farther than average from the Earth, so its apparent size is 3% smaller than that of the sun.

That distance means that the tip of the moon's cone of darkest shadow, called the umbra, will miss reaching Earth's surface. As a consequence, the moon will not be able to completely cover the sun and produce the grand spectacle of a total solar eclipse.

Instead, a "negative shadow" called the antumbra will produce a ring of fierce sunlight or a "ring of fire" that shines around the dark silhouette of the moon. The result is an annular eclipse, the name of which is derived from the Latin annulus, meaning "ring-shaped."

For an analogy, place a penny on top of a nickel. The penny represents the moon and the nickel represents the sun; a ring of silver remains visible around the penny's edge.

Sight for the millions

Unlike July's eclipse of the sun, during which the path of totality swept mostly over the open ocean, this eclipse will be visible from many heavily populated areas. Its path averages 88 miles (142 km) wide in a swath stretching from the Middle East to the western Pacific Ocean.

Skywatchers will be able to see the annular eclipse from locations including Saudi Arabia, Bahrain, Qatar, United Arab Emirates, Oman, India, Sri Lanka, Sumatra, Singapore, Borneo, the Philippines, and even the tiny U.S. territory of Guam.

The ring of sunlight will last the longest just east of the Indonesian island of Pulau Gin Besar, where the eclipse will glow for 3 minutes and 39.5 seconds.

Skywatchers in virtually all of Asia, northeastern Africa and the northern and western portions of Australia will be able to catch a partial eclipse. Local eclipse times for a number of cities in Asia are available online here courtesy of astronomer Fred Espenak. All times are local; the sun's altitude and azimuth, eclipse magnitude and eclipse obscuration are all given at the instant of maximum eclipse.

Looking ahead to 2020, another annular eclipse will sweep across Africa, Arabia, Asia and the Pacific on June 21. But because the moon will be closer to the Earth than during our upcoming eclipse, the ring of sunlight will be much thinner. The dark disk of the moon will appear to be only 0.6% smaller than that of the sun. In some regions, the annular eclipse will last just 38 seconds.

Then, on Dec. 14, a total solar eclipse will cross the South Pacific and parts of Chile and Argentina before passing over the South Atlantic. The maximum duration of totality will be 2 minutes and 10 seconds.

U.S. skywatchers will miss out on both of these events. North America isn't due for a solar eclipse until Oct. 14, 2023's annular spectacle. A total eclipse will follow less than six months later, on April 8, 2024.

Editor's note: If you capture a stunning view of the Dec. 26 "ring of fire" solar eclipse and would like to share it with Space.com and our news partners for a possible story or gallery, send images to Editor in Chief Tariq Malik at tmalik@space.com and spacephotos@space.com.