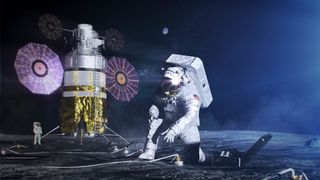 NASA's Artemis program aims to put people on the moon beginning in 2024. A few years before the program was announced, author Andy Weir released his book of the same name.
(Image: © NASA)

Andy Weir, the best-selling author of "The Martian" and "Artemis," was just as surprised as the rest of us when NASA gave its new crewed moon landing program a familiar name: "Artemis."

Weir found himself fielding a lot of puzzled queries from friends and families after NASA announced the program's name in May 2019, about 18 months after Weir's novel was published.

"It turns out that Apollo had a twin sister, Artemis. She happens to be the goddess of the moon," NASA Administrator Jim Bridenstine said, referring to Greek mythology, in a discussion with reporters at the time. "Our astronaut office is very diverse and highly qualified. I think it is very beautiful that 50 years after Apollo, the Artemis program will carry the next man — and the first woman — to the moon."

Science fiction author Andy Weir envisions what life is like on the moon base Artemis in his follow-up novel to "The Martian."

However, Weir told Space.com, NASA's program is not a reference to his fictional moon city "Artemis," (Crown Publishing, 2017), which is set in the 2080s and discusses matters such as commercial space ventures, space tourism and space smugglers.

"It was pretty cool; it was pretty funny," Weir said. "But they didn't name it after my book. It was just pure coincidence." Weir added that Artemis is a natural name not only because she is the sister of Apollo, but as a goddess, one of her responsibilities was the moon.

The Trump administration tasked NASA with landing astronauts on the moon by 2024 in preparation for crewed missions to Mars in the mid-2030s. NASA aims to launch an uncrewed test mission called Artemis I in late 2020 or early 2021, during which an Orion spacecraft loops around the moon and returns to Earth. Crewed Artemis missions will follow later in the program.

Weir said he wasn't sure if NASA could meet the 2024 deadline, or if these planned moon landings will happen. "I hope so, but we'll see," he said. "The problem with U.S. space policy is it's so heavily influenced from administration to administration …  you can't do a major space program in four to eight years."

He added that each president is eager to define their own space policy but, by doing so, "NASA gets whiplash." Since 2000, for example, George W. Bush had a program to send crewed missions to the moon and Mars, Barack Obama canceled that in favor of a "flexible destination" program that could include asteroid missions and Donald Trump canceled Obama's asteroid plans in favor of a new moon program with possible Mars landings.

Author Andy Weir's science fiction hit "The Martian" about an astronaut stranded on Mars is now an audiobook from Audible narrated by actor Wil Wheaton of "Star Trek: The Next Generation," "Big Bang Theory," and more. You can get it free with an Audible trial or download with one-click from Amazon for $30.58.View Deal

In 2019, NASA also paid tribute to the 50th anniversary of the Apollo 11 moon landing, the first such venture by humans. Weir said that he didn't closely follow the anniversary programming — "they did a lot of stuff" — but added that he is a "huge fan" of the Apollo program, which sent 12 people to the moon's surface between 1969 and 1972.

"I've never been too motivated by pomp and circumstance and ceremony, but it was an amazing accomplishment and we people,  as a planet, are proud of it," he said.