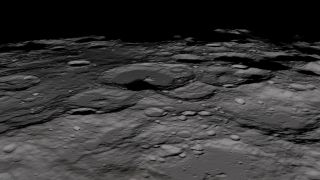 A view of the south pole of the moon from the Lunar Reconnaissance Orbiter.
(Image: © NASA/Scientific Visualization Studio)

Some ice deposits on the moon are younger than expected, researchers say, and it appears these deposits came from multiple sources at different times in our solar system's history.

This moon ice survives in permanently shadowed craters and could prove important for human missions in the 2020s, since water is essential for human survival and can also be processed to serve as rocket fuel.

Researchers used data from NASA's Lunar Reconnaissance Orbiter to study ice deposits around the moon's south pole, which is the region NASA wants astronauts to visit starting in 2024. Most of the deposits are billions of years old, but some of them are — unexpectedly — much younger.

Related: NASA Slammed a Rocket Body Into the Moon for Science 10 Years Ago

The vast majority of ice was deposited there no earlier than 3.1 billion years ago, which would be the ages of the studied craters. This ice is likely old because it is scattered across the floors of these craters, suggesting micrometeorites pummeled the ice over a long period of time. While the ice on the surface appears patchy, it's possible that more lurks below the surface.

"There have been models of bombardment through time showing that ice starts to concentrate with depth. So if you have a surface layer that's old, you'd expect more underneath," lead author Ariel Deutsch, a graduate student in Brown University's department of Earth, environmental and planetary sciences, said in a NASA statement. (Deutsch's adviser and co-author is Jim Head, an Apollo-era researcher who is a geological scientist at Brown University.)

As for the younger deposits, they show up in craters that appear to have sharper edges and weren't as eroded by micrometeorites over the ages. "That was a surprise," Deutsch said. "There hadn't really been any observations of ice in younger cold traps before."

If ice deposits of different ages are present on the moon, this could mean that the ice came from different sources. The older ice might have arrived from comets and asteroids slamming into the lunar surface, or ancient volcanic activity on the moon.

Volcanoes, comets and asteroids have not been as abundant in the last few billion years, so the newer ice probably arrived on tiny micrometeorites or was carried to the lunar surface by the solar wind (the constant stream of charged particles the sun emits).

The research team added that more study of the samples up close will be required, but fortunately, NASA does have plans to land its first astronauts in this very area in 2024.

The research is described in a paper published Sept. 30 in the journal Icarus.