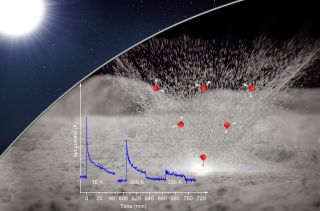 Water and its chemical precursors spray out from minerals on the moon's surface after a micrometeorite impact. Researchers have delved deeper into this process in the lab, taking the influence of solar wind into account.
(Image: © Molecules and data courtesy of Cheng Zhu and Ralf I. Kaiser; background image courtesy of NASA/Goddard/Conceptual Image Lab.)

For two decades, scientists have puzzled over the presence of water ice on the moon; now, they think they might know how it got there.

A new study suggests that solar wind and micrometeorites bearing down on the lunar surface react with minerals and lead to the formation of water. Researchers from the University of Hawaii at Manoa simulated this interaction in the lab, finding that their proxy moon rocks formed "pits" filled with water that burst open when the pressure inside grew too great. The newly formed water sprayed out as a gas, resembling steam suddenly released from a pressure cooker.

"I was surprised at what it looked like; that was the biggest shock to me," study co-author Jeffrey Gillis-Davis, a planetary scientist at the University of Hawai'i at Manoa in Honolulu, told Space.com. "In my mind, I thought it might leak out, not burst from the mineral so catastrophically."

Though rocks brought to Earth by the Apollo astronauts were deemed bone-dry, scientists have since found evidence of water all across the moon's surface. The origin of the water remained a mystery; some theorized it was delivered by comet, while others proposed it may have blown out from ancient volcanoes. Recently, scientists suggested that the solar wind — streams of charged particles emanating from the sun — might react with oxygen contained in moon dust and rocks to generate water.

But until now, lab experiments testing this theory have come up dry. The studies lacked one key ingredient: an intense burst of heat like that caused by a micrometeorite impact.

"Micrometeorite impacts heat the sample," principal investigator Ralf Kaiser, director of the W.M. Keck Research Laboratory in Astrochemistry at the University of Hawaii at Manoa, told Space.com in an email. "This heating leads to the formation of water from precursors and the subsequent release."

Kaiser and his collaborators watched this chemical reaction unfold by placing a common stand-in for lunar material, the mineral olivine, in a cylindrical chamber used to re-create the low-pressure environment of the moon. Through a port in the chamber, the researchers pummeled the mineral with a beam of "heavy hydrogen" ions. Heavy hydrogen ions resemble the normal hydrogen ions found in the solar wind, but each particle has an extra neutron attached, allowing the researchers to make sure their experiments weren't contaminated with water already in the lab. The scientists then zapped the mineral with a laser to mimic a barrage of micrometeorites, quickly raising its temperature to over 1,000 kelvins (over 1300 degrees Fahrenheit or 700 degrees Celsius).

Sure enough, after withstanding both ion beam and laser fire, the olivine sprayed out detectable levels of "heavy water" — water made with "heavy hydrogen." The material held tight to the ions until such time that a sudden rush of heat allowed the reaction to proceed. Imaging analyses revealed that a layer of the sample had "become like a English muffin in texture, full of nooks and crannies," said Gillis-Davis, marking where the liquid had formed.

Applied in isolation, neither the ion beam nor the laser could wrest water from the dry mineral.

"The method that this team employed … combines physical and chemical processes that occur in the lunar environment, but are very difficult to recreate in a laboratory setting, let alone to merge in a single experiment," said Mehdi Benna, a planetary scientist at NASA Goddard Space Flight Center in Greenbelt, Maryland, who was not involved in the study. "The results of this study confirm the long-held belief that the synergy between solar proton implementation and micrometeoroid impact provides an important pathway for water synthesis in the regolith," he told Space.com in an email.

Benna led a NASA study, published this April, which concluded that water actually does spray from the lunar surface when the moon is struck by meteorite streams. The University of Hawaii paper, published today (May 20) in the journal Proceedings of the National Academy of Sciences, may offer new insight into what propels these puffs of water from the dusty lunar surface, and whether similar reactions take place on Mercury, asteroids and other airless bodies throughout the solar system.

Editor's Note: This article was updated to reflect that a similar reaction is more likely to take place on Mercury than Mars.