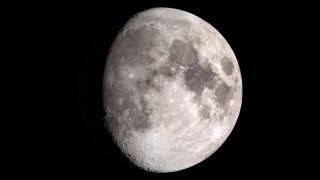 Scientists analyzing how the solar wind affects the moon's surface think the interaction may create a key ingredient of water.
(Image: © Ernie Wright/NASA)

As humans, we rely on water, and that will be no different during long-term space exploration — which is why scientists are investigating how and where water forms elsewhere in the solar system.

One piece of new research suggests that in making the ingredients of water, the moon gets a boost from the constant barrage of charged plasma particles streaming off the sun, called the solar wind.

"We think of water as this special, magical compound," William M. Farrell, a plasma physicist at NASA's Goddard Space Flight Center in Maryland and co-author on the new research, said in a statement. "But here's what's amazing: Every rock has the potential to make water, especially after being irradiated by the solar wind."

Farrell and his co-authors created a new simulation of the chemical reactions that take place at the moon's surface. That computer simulation suggested that the solar wind breaks apart oxygen-rich compounds in the lunar soil.

Then, positively charged protons within the solar wind combine with lunar electrons to create hydrogen atoms. Those atoms then meet up with oxygen atoms available in a range of different molecules found on the moon to create hydroxyl, which is just one hydrogen atom short of water.

The team was able to combine that chemistry and the amount of hydroxyl in the moon's crust with measurements of hydrogen in the moon's wispy atmosphere and in the solar wind itself to see how the three substances interact.

That makes the solar wind a potentially valuable resource — an unusual statement for a phenomenon that is usually considered a danger to life. On Earth, we're protected from this wind's negative impacts by the planet's thick atmosphere and robust magnetic field, but on the moon, most of the solar wind hits the surface.

While the research so far has looked only at the moon, the scientists believe a similar process plays out wherever rock meets solar wind. If that turns out to be the case, it could have real implications for human and robotic exploration.

"The whole process is like a chemical factory," Farrell said.

The research is described in a paper published in December in the journal JGR Planets.