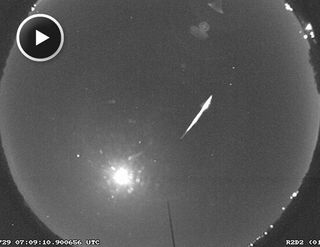 A fireball from a Southern Delta Aquarid meteor streaks over one of the network cameras in July 2010 in this still image from a NASA video camera.
(Image: © NASA)

Imagine a baseball zipping along at 30,000 miles per hour. That's how big and fast many meteors are. And though some are bigger than baseballs, most are more like grains of sand. The larger meteors are sometimes broken bits off asteroids or other planets. The small stuff is often dust left by a passing comet.

Entry into the atmosphere

When they plow through the atmosphere, meteors are heated to more than 3000 degrees Fahrenheit, and they glow. Meteors are not heated by friction, as is commonly thought. A phenomenon called ram pressure is at work. A meteor compresses air in front of it. The air heats up, in turn heating the meteor.

The intense heat vaporizes most meteors, creating what we call shooting stars. (Most become visible at around 60 miles up.) Some large meteors splatter, causing a brighter flash called a fireball, and an explosion, which can often be heard up to 30 miles away. When meteors hit the ground, they're called meteorites. Some meteors are bits broken off asteroids, others -- mere cosmic dust -- are cast off by comets. (And one more term: A meteoroid is an object in space that may, if it enters our atmosphere, become a meteor.)

Whether an object breaks apart depends on its composition, speed and angle of entry. A faster meteor at an oblique angle suffers greater stress. Meteors composed of iron withstand the stress better than those made of stone. Even an iron meteor will usually break up as the atmosphere becomes denser -- around 5 to 7 miles up.

A meteor sometimes explodes above the surface, causing widespread damage from the blast and ensuing fire. This happened in 1908 over Siberia.

Extraterrestrial objects that hit the ground, their speed roughly half what it was upon entry, blast out craters 12 to 20 times their size. Craters on Earth form much as they would on the moon or any rocky planet. Smaller objects create simple, bowl-shaped craters. Larger impacts cause a rebound that creates a central peak; slipping along the rim forms terraces. The largest impacts form basins in which multiple rebounds form several inner peaks.

In ancient times, objects in the night sky conjured superstition and were associated with gods and religion. But misunderstandings about meteors lasted longer than they did about most other celestial objects.

Meteorites (the pieces that make it to Earth) were long ago thought to be cast down as gifts from angels. Others thought the gods were displaying their anger. As late as the 17th century, many believed they fell from thunderstorms (they were nicknamed "thunderstones"). Many scientists were skeptical that stones could fall from the clouds or the heavens, and often they simply didn't believe the accounts of people who claimed to have seen such things.

In 1807, a fireball exploded over Connecticut, and several meteorites rained down. By then the first handful of asteroids had been discovered, and a new theory emerged suggesting meteorites were broken bits off asteroids or other planets. (A theory that still holds.)

One of the most significant meteorite events in recent history destroyed hundreds of square miles of forest in Siberia on June 30, 1908. Across hundreds of miles, witnesses of the Tunguska event saw a ball of fire streak through the sky, suggesting the meteor entered the atmosphere at an oblique angle. It exploded, sending out hot winds and loud noises and shook the ground enough to break windows in nearby villages. Small particles blown into the atmosphere lit the night sky for several days. No meteorite was ever found, and for years many scientists thought the devastation was caused by a comet. Now, the prevailing theory holds that a meteor exploded just above the surface.

The largest meteorite recovered in the United States fell in a wheat field in southern Nebraska in 1948. Witnesses saw a giant fireball in the afternoon that some said was brighter than the sun. The meteorite was found buried 10 feet deep in the ground. It weighed 2,360 pounds.

The most famous meteorite crater in the United States is misnamed Meteor Crater. It's in Arizona, and it's huge. The rim rises 150 feet from the surrounding plain, and the hole is 600 feet deep and nearly a mile wide. It was the first crater that was proved to be caused by a meteorite impact, which occurred between 20,000 and 50,000 years ago.

When a comet nears the sun, a trail of dust and other debris burns off and remains in solar orbit. As Earth orbits the sun, it passes through this debris field spread across its path. Small bits burn up in the atmosphere, creating meteors. Meteors come from other sources, too, but comet debris streams are the source of sometimes dramatic meteor showers.

The part of Earth where dawn is breaking is always at the leading edge of our planet's plunge along its orbital path around the Sun. This part of the planet tends to "catch" oncoming meteors left by a comet, whereas the other side of Earth, where it is dusk or late evening, outruns the debris. For that reason, the hours between midnight and dawn are typically the best time to watch a meteor shower.

Significant meteor showers are announced on our Spacewatch page.