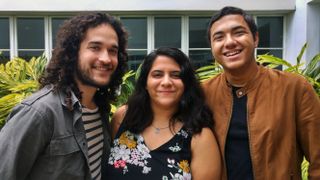 Amid a global pandemic, earthquakes and the lingering aftermath of Hurricane Maria, university students in Puerto Rico have found an unlikely source of hope: an abandoned astronomical observatory they discovered at their school.

The Circle of University Astrobiology at the University of Puerto Rico (UPR), Río Piedras, is a group of students from science and nonscience majors alike who are interested in astrobiology. Their projects include collecting micrometeorites on campus and planning events such as astrophotography nights.

Three members of the group — Kevin Ortíz Ceballos, Jorge Pérez Figueroa and Alejandra Ocasio — recently spoke with Space.com about their discovery of an abandoned astronomical observatory in the university's music building and their intention to restore the facility.

Pérez Figueroa, an undergraduate student studying interdisciplinary science and philosophy, posted a video of his discovery on Twitter on Sept. 16, 2019.

"I came across this abandoned observatory in the Agustín Stahl building (what is now part of the Music Department). Does anyone know its history, the story of why it is abandoned and if the structure is restorable?" Pérez Figueroa wrote in Spanish in the tweet.

Pérez Figueroa came across the facility when he first noticed a "huge, blue dome" on top of a building that faced the street he was driving down, he told Space.com. "It quickly hit me that this dome is an astronomical dome," he said. "It was astonishing that there was this huge dome right there with everything inside. The telescope was inside it, but [it was] completely abandoned. And it seemed like it had been abandoned for years upon years."

He relayed his finding to Ortíz Ceballos and Ocasio, and the trio began asking the physics and music departments about the room's history. The dome sits abandoned within the building that once held the physics department, but now it's home to the music department. The students did not turn up much in their initial inquiries. No one knew much about the building, Pérez Figeroa said, "except for that it was damaged and no longer working."

But after some digging, which included conversations with the Puerto Rico Historic Buildings Drawings Society, they began learning more about the observatory.

Ortíz Ceballos, an undergraduate student studying physics and philosophy, has already gotten a taste for astronomy research, conducting observations of the first known interstellar comet, called 2I/Borisov. At a meeting of the American Astronomical Society held in Honolulu in January, Ortíz Ceballos represented the trio and shared the story of the abandoned dome and what they had learned about it so far.

According to Ortíz Ceballos' presentation, the observatory was built in the 1930s by the university's physics department and was used for research until the 1960s. It was during that decade that the Arecibo Observatory, a giant radio telescope that is the second largest of its kind, was built in Puerto Rico. The university observatory continued operating until the 1970s but was used mostly for educational activities.

Eventually, according to Ortíz Ceballos, the dome's closing mechanism broke, and the telescope suffered water damage. By the 1980s, the building housed the music department, and the observatory was sometimes used as a classroom. The room hasn't been used since at least 2017, when Hurricane Maria battered the island, and the university closed it off shortly after Pérez Figueroa came across it.

Along with Ocasio, an architecture student at the university, Ortíz Ceballos and Pérez Figueroa continue to investigate the history of the observatory. But they haven't spent as much time on campus this semester as they had expected. The earthquakes that shook the island beginning in December 2019 closed the University of Puerto Rico for several days, and as of March 13, UPR canceled classes due to the ongoing spread of the coronavirus.

Ortíz Ceballos told Space.com that the earthquakes left him feeling powerless, and he wasn't alone. The disasters had collectively taken a toll on public mental health, and many Puerto Ricans were frustrated by local and federal responses.

Revisiting this old observatory gives the students hope, said Ocasio, who felt a tremor while in class this academic year.

"I am an architecture student, and we are very much taught to create more things," she said, adding that although she doesn't study science, her classwork requires her to think rigorously and critically about concepts that apply to the observatory space. Those concepts include the defining qualities of a space and the value of a room.

"We have a space that is created, and it needs just a little bit more attention," Ocasio said, adding that the project would restore something and combat the idea of abandoning and demolishing old structures as a solution to developing the urban landscape.

Pérez Figueroa thinks of their investigation as a microcosm of Puerto Rican society.

The natural disasters and the island's tense politics over the past several years have caused constant social anxiety, he said. "I guess what we're doing represents what most of the population is doing, by trying to create something new and different," that, as later he added, doesn't require change from top to bottom.

This spirit is part of the charter of the Circle of University Astrobiology in the first place, the students said.

"The Astrobiology Circle is not just an academic association of students; it also has within its ethos this drive to do social good within the community," Pérez Figueroa said. "This is the perfect opportunity to let that show. We find something that's of scientific value, of historic value, of community value, and if we can find ways for it to be restored, to give something back to the community, it'll be here long after we're gone. And I think that's worth pursuing."