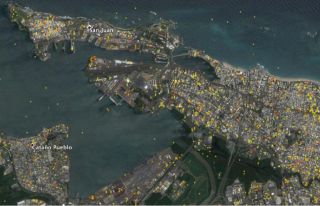 This Damage Proxy Map (DPM) depicts areas of Eastern Puerto Rico that are likely damaged (shown by red and yellow pixels) as a result of Hurricane Maria. The map covers an area of 105 by 60 miles (169 by 96 kilometers).
(Image: © NASA/JPL-Caltech/ESA/Copernicus/Google)

NASA is using data from Earth-observing satellites to assist relief efforts in Puerto Rico, which was devastated by Hurricane Maria last week.

Scientists at NASA's Jet Propulsion Laboratory in Pasadena, California, collected observations of Puerto Rico taken by the European Space Agency's Copernicus Sentinel-1A and Sentinel-1B satellites, according to a statement from NASA. The radar images were taken before and after the storm made landfall.

The images were then used to create a "damage proxy map," which the agency has subsequently provided to the Federal Emergency Management Agency (FEMA), according to the statement. FEMA then "combined the map with building infrastructure data," NASA officials said, and created an estimated damage density map, which was sent to FEMA’s Urban Search and Rescue teams in the field in Puerto Rico.

This effort, which is overseen by the NASA Disasters Program — part of the agency's Earth Science Division — uses Earth-observing satellites to create maps of areas that have been affected by natural disasters.

Hurricane Maria was the first Category 4 hurricane to hit Puerto Rico since 1932, and it has left many residents without shelter, water or means of communication with the outside world. NASA and the National Oceanic and Atmospheric Administration (NOAA) monitored Maria's progress from space as it raged through the Atlantic Ocean and into the Caribbean Sea. An astronaut on the International Space Station also shared photos of the storm from space.

Puerto Rico is home to the Arecibo Observatory, which hosts the world's second-largest radio telescope. Observatory officials have reported that some damage was done to the facility and the telescope during the storm.