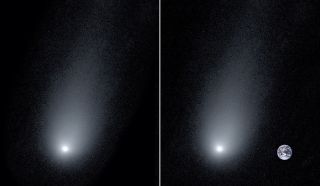 Left: A new image of the interstellar Comet 2l/Borisov. Right: A composite image of the comet with a photo of the Earth to show scale.
(Image: © Pieter van Dokkum, Cheng-Han Hsieh, Shany Danieli and Gregory Laughlin)

A team of astronomers from Yale University in Connecticut imaged Comet 2I/Borisov on Sunday (Nov. 24) using the Keck Observatory in Hawaii, revealing the object's tail to be nearly 100,000 miles (160,000 kilometers) long.

That's about 14 times Earth's diameter, and more than 40% the distance from our planet to the moon.

"It's humbling to realize how small Earth is next to this visitor from another solar system," Yale astronomy professor Pieter van Dokkum said in a statement.

Borisov's tail dwarfs its body, of course; researchers think the comet's nucleus is just 1 mile (1.6 km) or so across.

The comet was discovered in late August by amateur astronomer Gennadiy Borisov. Analysis of the object's speed and trajectory revealed that it came into our solar system from afar, making it the second known interstellar interloper after the mysterious body 'Oumuamua, which was first spotted in October 2017.

Astronomers didn't see 'Oumuamua until it had already zoomed past Earth on its way toward the outer solar system, limiting the opportunity for detailed study. But Comet Borisov is a more obliging target. It's still inward bound, with perihelion (closest approach to the sun) coming on Dec. 8 and closest approach to Earth following about three weeks after that.

"Astronomers are taking advantage of Borisov's visit, using telescopes such as Keck to obtain information about the building blocks of planets in systems other than our own," Yale astronomy professor Greg Laughlin said in the same statement.

Amateurs might be able to observe Borisov over the coming weeks as well, though they'll probably need some pretty good equipment to do so. "Based on observing many comets over decades, we probably can rule out seeing the object in anything smaller than an 8-inch telescope under pristine skies," Sky & Telescope wrote in September.

'Oumuamua and Borisov are likely just the tip of the interstellar iceberg, most astronomers think; there are probably lots of these visitors cruising through our solar system undetected. But we could start getting a decent idea of their population soon, when some big new observatories — especially the Large Synoptic Survey Telescope, which will be a very efficient small-body hunter — come online.