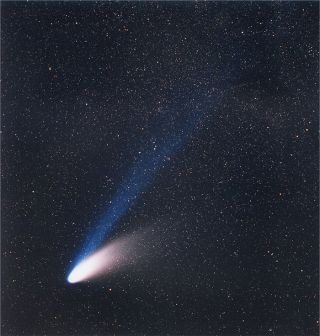 Comet C/1995 O1 Hale–Bopp, which shone in the night sky in 1997. Long period comets such as Hale-Bopp were once deemed to be the primary impact hazard to Earth.
(Image: © ESO)

This photograph of Comet West, one of the greatest comets of all-time, was taken by amateur astronomer John Laborde. The picture shows the two distinct tails. The thin blue ion tail is made up of gases, while the broad white tail is made up of tiny dust particles.

Comet McNaught over the Pacific Ocean. Image taken from Paranal Observatory in January 2007.

Comets From Edge of Solar System Unlikely to Hit Earth

A long-period comet called 2001 RX14 (Linear) turned up in images captured in 2002 by the Sloan Digital Sky Survey telescope in New Mexico.

Broken Comet On Its Way

Comet Lovejoy is visible near Earth's horizon in this nighttime image photographed by NASA astronaut Dan Burbank, Expedition 30 commander, onboard the International Space Station on Dec. 22, 2011.

This image of comet 153P/Ikeya-Zhang, taken by skywatcher Gilbert Jones on March 11, 2002, shows its ion tail decimated by a run-in with a coronal mass ejection (CME) from the Sun.

Jack Newton and his wife are building a stargazing community 150 miles southeast of Tucson. That Arizona Sky Village was the location from which he made this photo of comet Lulin on Feb. 18, 2009.

Giampaolo Salvato photographed Comet Tuttle on Dec. 30, 2007 as it appeared near the spiral galaxy M33. The image was taken from northern Italy with a backyard telescope and a digital camera.