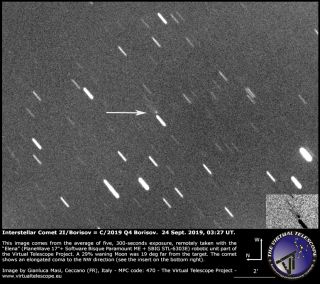 A comet spotted at the end of August is officially an interstellar object, according to the International Astronomical Union (IAU).

The verdict means that the object, provisionally called Comet C/2019, is now dubbed 2I/Borisov, with the prefix marking that the comet is the second interstellar object scientists have identified to date; the first was 1I/'Oumuamua, which was first spotted in October 2017.

"The orbit is now sufficiently well known, and the object is unambiguously interstellar in origin; it has received its final designation as the second interstellar object, 2I," the IAU wrote in a statement. The name Borisov honors its discoverer, Crimean amateur astronomer Gennady Borisov, the statement added.

By early September, scientists were speculating, based on the initial data, that the object was interstellar, but the IAU held out for more observations before releasing the statement yesterday (Sept. 24).

To make the determination, scientists tracked the comet's location long enough to confirm that it had an extremely hyperbolic orbit, a wide arc that approaches from one direction and departs in another, marking it as an object just passing through our solar system. 2I/Borisov has a more hyperbolic path than any other comet scientists have studied to date, the IAU wrote. (Objects born in our solar system are trapped in elliptical orbits around the sun that resemble squished circles.)

Those observations have also allowed scientists to calculate when 2I/Borisov will make its closest approach to the sun. On Dec. 7, the comet will swing past the sun at a distance of 186 million miles (300 million kilometers), about twice as far as the distance between Earth and the sun (which is about 93 million miles or 150 million km). Around this time, the comet will also become visible only from the Southern Hemisphere. 2I/Borisov will be easiest to spot from Earth during December and January, but it will remain observable until later in 2020.