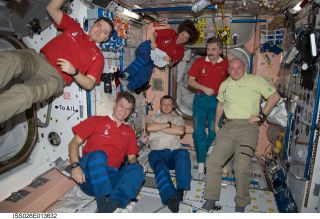 A trio of cosmonauts living on the International Space Station celebrated a second Christmas in orbit today (Jan. 7) to mark Russian Orthodox Christmas.

The three cosmonauts have the day off in space today to celebrate the Russian holiday, which comes just over two weeks after the Dec. 25 Christmas holiday. The Russian Orthodox Church celebrates Christmas according to the Julian calendar, marking the event today instead of on Dec. 25.

"The cosmonauts will have an off-duty day and our understanding is they are planning the traditional special greeting for them from the leader of the Russian Orthodox Church," NASA spokesperson Nicole Cloutier-Lemasters told SPACE.com from the Johnson Space Center in Houston.

The multicultural astronauts that live and work on the International Space Station often choose which holidays they will celebrate before the crew ever launches into orbit. For example, the station's entire crew celebrated Christmas in space on Dec. 25, and then rang in the New Year on Jan. 1.

Since today is a Russian holiday, the station's American astronauts aren't expected to take time off, Cloutier-Lemasters said. But that doesn’t mean the non-Russians on the station's crew are oblivious to the festive Russian tradition.

"Merry Christmas to all Russia!" wrote Italian astronaut Paolo Nespoli, the only European member of the space station's crew, on Twitter, where he is chronicling his flight as Astro_Paolo.

The $100 billion International Space Station has been under construction since 1998 and served as an orbital research outpost for astronauts since the first crew took up residence in 2000.

Today, the station has  living space equivalent to a Boeing 747 jumbo jet and a wingspan as long as a football field. It can easily be spotted from Earth without the use of a telescope by skywatchers who know where to look and have clear weather.

All six crew members on the space station are expected to get back to work on Monday (Jan. 10).