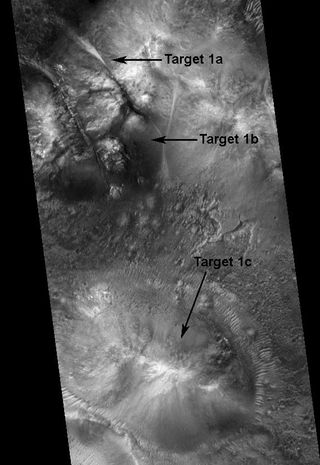 This image of Mars taken by NASA's Mars Reconnaissance Orbiter shows what some psychics have claimed to be evidence of life on Mars.
(Image: © NASA/JPL/Malin Space Science Systems)

A team ofpsychics claims to have found evidence not only of life on Mars, but alargeindustrial dome and a plume of waste coming from it.

In a recentvideopresentation titled, "Evidence of Artificiality onMars,"researcher Courtney Brown, founder of an organization of psychicscalled theFarsight Institute, claimed to have found mysterious features in aphotographof Mars. [Seethe Mars photo.]

In a YouTubevideo describing the "anomaly," Brown states, "Here at the topyou see a spray.... a straight nozzle that's horizontally placed, andwhatlooks like a pipeline going into a dome... below there's also a verylarge domethat is highly reflective, it looks like it's made of some sort ofresinmaterial."

Brown goeson to say, "We know of no geological processes that produce ahorizontalnozzle with a strong powerful spray coming out of it. In fact mostgeologicalprocesses with geysers have flat land and the spray comes up. So thatwas ananomaly, we wondered: What's that all about?"

Some remoteviewers described tunnels and rooms under the domes and work going oninsidethem; others explained that the domes might be part of a secretU.S. military experiment; still anotherexplained that the beingsthat live in the domes do not fully understand the technology they use.

It's allvery heady, sci-fi stuff masquerading as scientific research; accordingtoBrown they are "using remote viewing in a scientific manner to doexploration."

There areseveral errors here, so let's unpack them one at a time. The mostobviousmistake is that instead of verifying that the anomaly observed in factexists,he simply assumes that what he reads into the NASA photo is correct andaskspsychics to "confirm" his interpretation.

This iscompletelyunscientific, because there is no verifiable, third-party data tosupport orrefute either Brown's interpretations or the psychics' information.

Just becauseBrown sees something that he thinks resembles aspray, a pipeline, or adome doesn't mean it's actually there.

If theinformation that a psychic provides agrees with Brown?s interpretationof thephoto, Brown deems it "verified." But whether the dome is made ofresin, metal, or recycled Britney Spears CDs ? or even exists at all ?is unknowablewithout sending a space probe there.

If twoguesses happen to match, it doesn't "verify" or validate the guess.Without being able to determine what is actually there, everything inthisproject is not science but instead pure ungrounded speculation, notunlikeasking 'How many Martians can dance on the head of a pin?'

Second, evenif the "spray" that Brown sees is in fact a spray of some sort,calling it an anomaly because it doesn't resemble Earth's geologicalgeysers ismeaningless.

Earth andMars have very different atmospheres, and there is no reason to assumethat aspray of some unknown substance on the surface of Mars would lookanything likean identical spray here on Earth. So that part of the "anomaly" doesn'teven exist. This is grade-school science, and the fact that Brown ? aPh.D.social scientist at Emory University ? would make such basic mistakesispuzzling.

This is ofcourse not the first time people have claimed to find evidence ofstructures onMars. Most famously, American author Richard Hoagland claimed to find aso-called FaceonMars ? which turned out to be merely a trickof the light in a very low-resolution photograph.

If theFarsight Institute wants to spend their time and energy asking psychicsto tellthem what's inside Courtney Brown's imaginary resin domes on thesurface ofMars, they are welcome to.

I'm sure thepublicity from the project will help sell more of Brown's books andseminars.The real danger is in misleading the public about how science works,andpretending that the project is scientific, cutting-edge research.

BenjaminRadford is managing editor of the SkepticalInquirer sciencemagazine. His books, films, and other projects can be found on his website. His BadScience column appearsregularly on LiveScience.

Editor's Note: Several readers have pointed out the absurdity of this claim. We could not agree more. SPACE.com has a long history of pointing out and debunking absurd claims because, frankly, if it's not done, then a lot of people end up buying into the pseudoscience. We in no way meant to give credence to the claim, but we recognize that that risk exists whenever one devotes some ink to debunking. In retrospect, a more skeptical headline would have been in order.