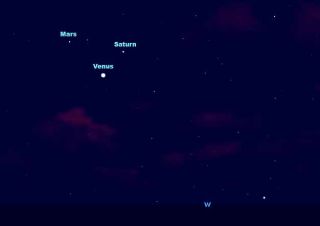 Mars, Saturn and Venus form a tight triangle in the western evening sky for the next several nights. Here they are show as of Aug. 8, 2010 at about 8:30 p.m. local time.
(Image: © Starry Night Software [Full Story])

Thenext few nights offer two spectacular cosmic views that anyone can enjoy. Thisweekend marks the peak of a beautiful alignment of the planets Venus, Mars andSaturn in the evening sky. This impressive gathering comes ahead of the annualPerseid meteor shower, a shooting star fest that will be at its best Aug. 11 to13.

Aboutan hour after sunset, anyone with a clear and open view of the west-northwesthorizon should be able to spot the triangle of three planets shining low in the west.

This graphic shows where to look to spot the planetary triangle on Aug. 8.

"Thesethree planets are destined to crowd into a relatively small area of the sky,making for a very distinctive and eye-catching formation that is sure to thrillmost sky watchers," said Joe Rao, SPACE.com Skywatching Columnist.

Venus, thefamed "Evening Star," will shine brightest in the sky, with Mars andSaturn appearing fainter. You can see them together any evening now through themeteor shower.

"Sowhile Venus should be more than bright enough to see with the unaided eye inthe fading twilight glow, Saturn and Mars will likely be a bit moredifficult," Rao said. "Indeed, although Saturn and Mars are of firstmagnitude, they appear only about 1/150th as bright as Venus!"

Raorecommends also using binoculars to scan the sky for the planetary alignment,particularly if the sky is hazy. People under dark skies in rural locationswill have no trouble spotting the trio.

But,the show will go on, when the Perseid meteor shower begins.

ThePerseid meteor shower is caused by debris from Comet Swift-Tuttle. Every 133years the comet swings through the inner solar system and leaves behind a trailof debris. Earth passes through these trails each August. When the comet bitsenter our atmosphere, they vaporize, creating the meteors. [Top 10Perseid Meteor Shower Facts]

Weatherpermitting, skywatchers can catch these "shooting stars"anywhere, but the best views are under dark skies, away from urban and suburbanlights, Rao said.

"Thebest time to watch for meteors will be from the late-night hours of Wednesday,Aug. 11 on through the predawn hours of Aug. 13 ? two full nights and earlymornings," he said. "Patient skywatchers with good conditions couldsee up to 60 shooting stars an hour or more."